This Vegan Omelet French Toast Sandwich is perfection. It’s a puffy cloud of Just Egg cooked with peppers, potatoes, onions, and cradled in two pieces of French toast. Seriously, this is delicious. It takes less than 20 minutes and is easy to make. 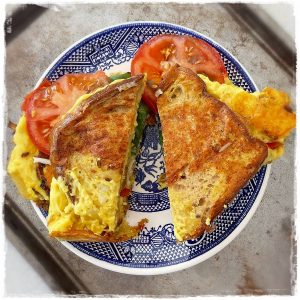 A Great Technique for Plant-Based Omelets

I thought this was a fantastic breakfast. If I ever open a vegan restaurant this sandwich will be on the menu. Maybe this will be the only thing I sell there. The Vegan Omelet French Toast Sandwich Restaurant. This has everything in it to be yummy.

Before I made this, I suspected it may be a fun gimmick for a Tik Tok video or whatever, but it works and is really helpful in a real-life scenario. I’ll be making this dish using this technique over and over again because it’s convenient and it works.

We’d tried Just Egg before and my initial reaction was that it wasn’t that great and cost too much. I made my own version of something Just Egg-ish with this Vegan Egg Scramble, which is pretty good and is so simple. But I recently noticed Just Egg at Whole Foods for right around $3.00. That was cheap enough for me to get a couple of bottles to experiment with.

Is it Omelet or Omelette?

Both are correct! Omelet is the usual American spelling while omelette is how this delicious dish usually spelled in the UK. 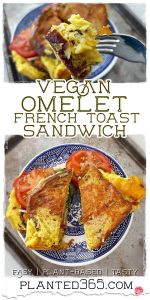 Just start with some chopped-up vegetables. Customize this how you like, too. I used cubed potatoes, chopped onion, chopped red bell peppers, and mushrooms. However, I can think of so many things that would be tasty here. 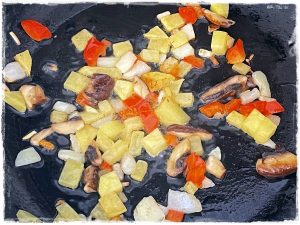 Saute the vegetables in a generous dollop of oil until tender. This takes about 6 minutes, 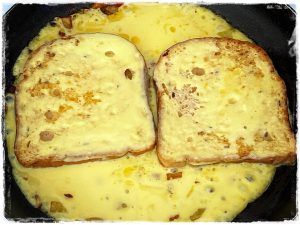 Then pour about half a bottle of Just Egg in the bottom of the pan.  Take two pieces of bread (I use gluten-free!) and lay each one down long enough to get them lightly coated with Just Egg, That’s the part that makes it like French Toast.

Cover it with a lid to hold the heat in. DON’T TOUCH IT for at least a minute or two (I can hardly resist this). Letting it cook until the bottom is firm is the trick to flipping it in one piece. Loosen the edges of the Just Egg and then get the spatula under the whole thing and flip it. It’s moderately tricky but can be done. A large spatula is helpful! Add more cheese on the side that is now up. Some spinach and tomatoes are nice, too. When the underside is cooked, in a few minutes, flip one half over the other to make a sandwich,

I’ve included a video recipe for this one. 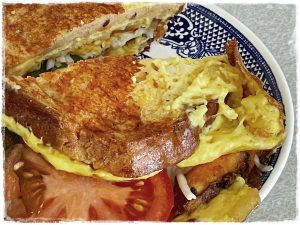 As an Amazon Associate and member of other affiliate programs, I earn from qualifying purchases.

Delicious!!!!!, will want this now for breakfast every weekend.

Hey Rusty! Let me know how you like it! xo

Hi Lisa! Thank you for this yummy looking recipe…I can’t wait to try it too!
I think the video that accompanies it might not have loaded correctly, either that or I missed it entirely as I drooled over the delicious photos…lol!!!
I also saw that the 2 Tablespoons of chopped onions was listed twice but only see where one of these portions are used, might I have missed something there too?
I love your recipes and stories and look forward to your emails.
Thank you so much for everything you do!!!!
With Appreciation, Ka Ra

Thanks for pointing that out, Ka Ra! I’ve changed it. One of those was supposed to be chopped potato! And thank you for saying you like the recipes … it’s always great to hear that!! Appreciation back at ya! Lisa