This DIY Impossible Burger 2.0 recipe is easy to make at home using commonly found ingredients. It’s vegan and gluten-free, too! 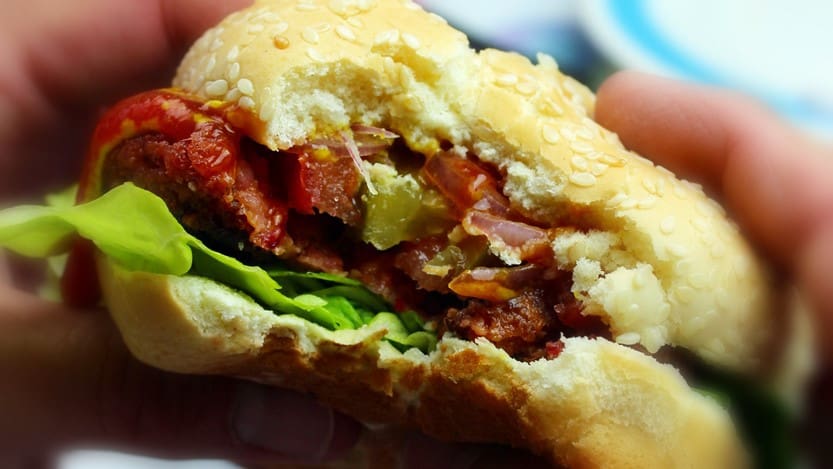 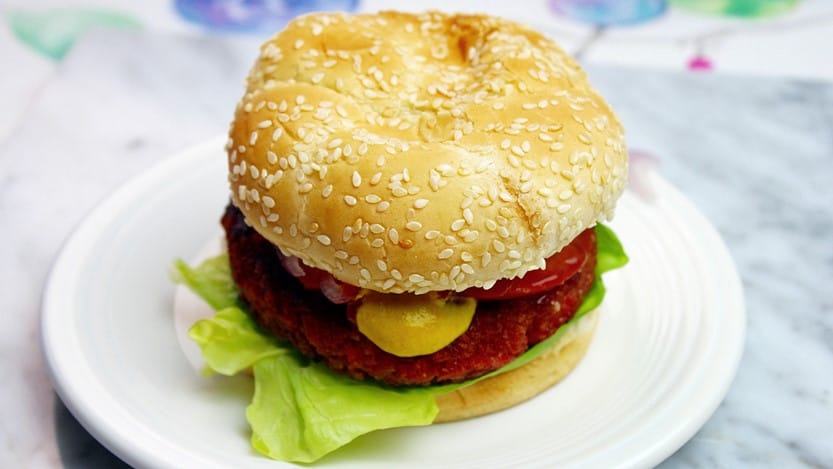 But there are a few key differences.

The original Impossible Burger available in restaurants contained wheat and got at least some of its chewy texture from wheat gluten. Gluten is yummy and has a stiff and stretchy texture ideal for making faux meats … unless you’re one of the many people who are sensitive to it.

Impossible Burger 2.0 Cheaper to Make it at Home!

This entire batch of DIY Impossible Burgers cost about $6.00 and makes 6-8 burgers. That’s right around $1 per burger or less. What a bargain!

This DIY Impossible Burger 2.0 recipe is built on a foundation of protein, fat, a starchy binder, and beef-like flavors and is tasty, inexpensive, and simple to make.

It’s easy and also less expensive than its restaurant counterpart. This homemade version also uses soy protein and starch to make a chewy burger, just like the real Impossible Burger 2.0. This one doesn’t have the GMO heme ingredient but gets a “realistic” red coloring from just a little bit of beets. If you don’t like this, and I wouldn’t blame you if you didn’t, just omit the beets. They’re only there for color.

Start with TVP for Protein

The restaurant version Impossible Burger 2.0 uses soy protein and we have, too, starting with TVP. 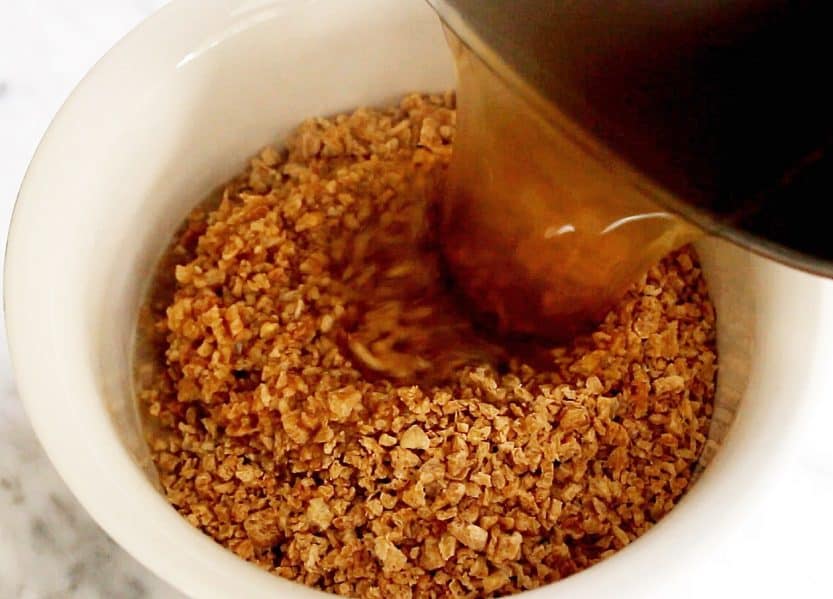 TVP is the acronym for texturized vegetable protein. It’s defatted soy and also known as texturized vegetable protein, soya chunks, and soy meat. It has a meaty, chewy texture and is very high in protein, with 54 gr protein per every 100 gr TVP. It comes dried and I like the Bob’s Red Mill version, which is available in many grocery stores. If you can’t find it locally, it can be found on Amazon and this one is about $4.60 per 10 oz bag. 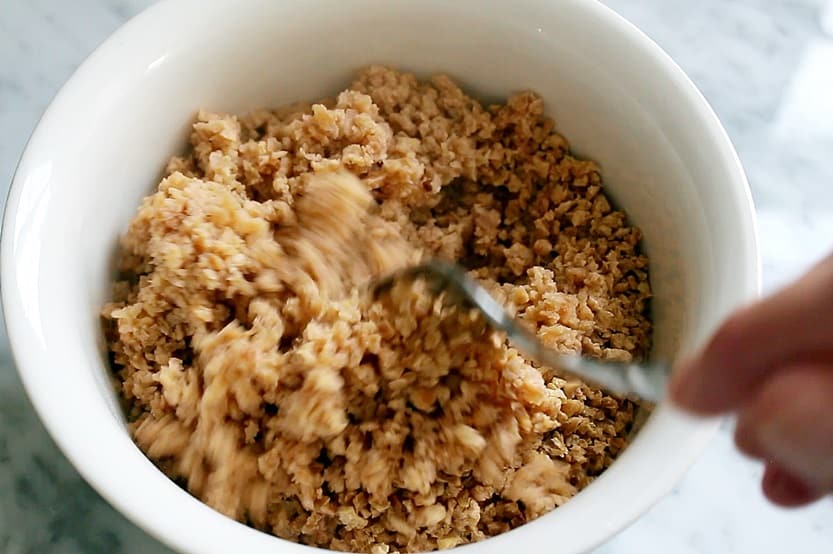 TVP can be rehydrated with very hot water or veggie broth, depending on what you’re using it for. Here, I’ve used vegetable broth because I wanted extra flavor. Just let it sit for a few minutes and then fluff with a fork and it’s ready to use. The next step is to just put everything into the food processor and pulse. 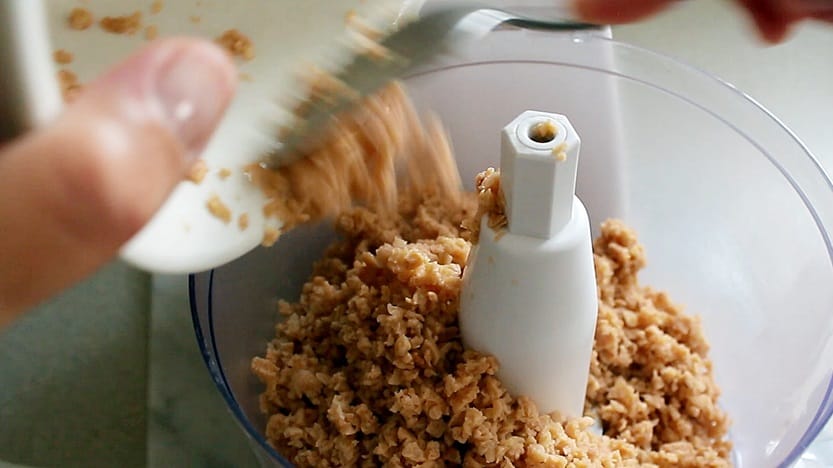 The starchy binder that I really like to use in burgers is short grain rice. It’s inexpensive, quick and easy to make, and works great to make a sturdy, chewy, not squishy burger.

I’ve used coconut oil and just a little sunflower oil which is what is in the real Impossible Burger 2.0. It adds flavor and “mouth feel.” It’s important to put the coconut oil in when solid and not liquid. It gets chopped up into little pieces and distributed throughout the burger and when cooked those little pockets of fat help cook the insides.

Note: This recipe can be made without oil and is still delicious and yummy! I’ve used coconut oil and a little sunflower oil, just like the real Impossible Burger 2.0. But you don’t have to. Simply omit the oil without substitution and bake or fry without oil as desired. 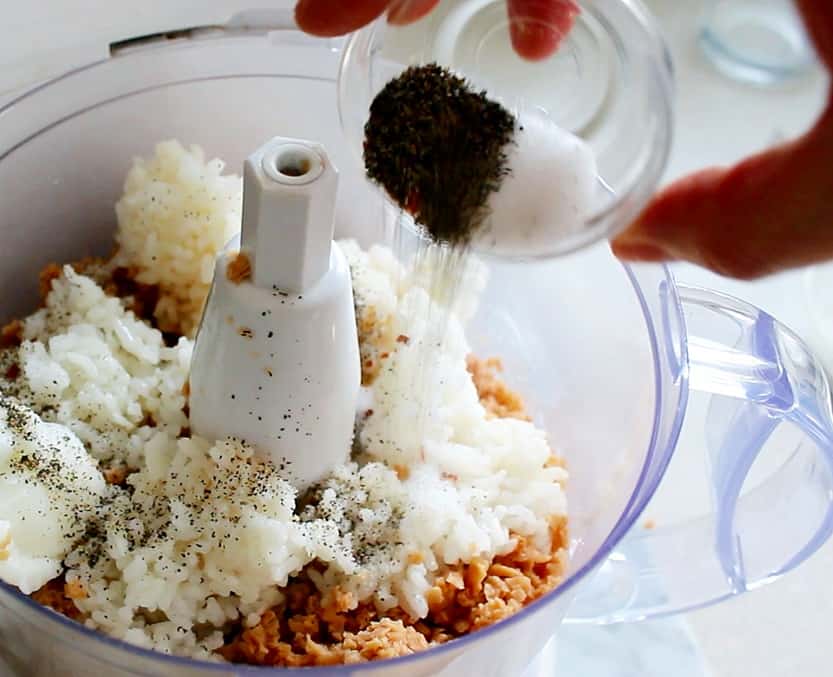 Add in the spices. I’ve used salt, pepper, some red pepper flakes, garlic powder, and onion powder. I’ve also added some Black Garlic, which is a fermented garlic. The one I used is made by McCormick and I found it at my local grocery. If you can’t find it, try THIS BLACK GARLIC from Amazon. If you can’t find it or don’t want to use it, just omit it. No big deal. 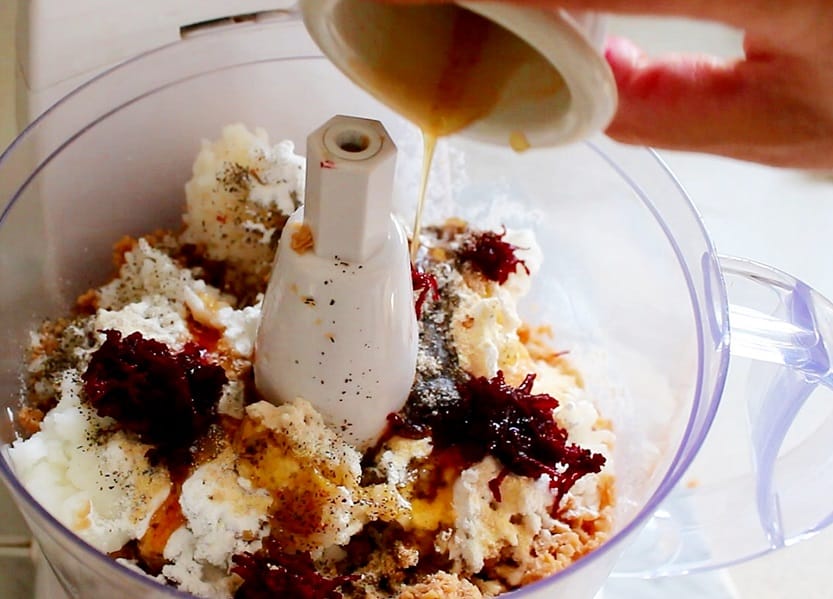 I also added a good amount of liquid smoke and a teaspoon of Better Than Broth Vegetable Bouillon.  If you can’t find this just omit or use your favorite bouillon. I love the Better Than Broth one and use it in all sorts of things. 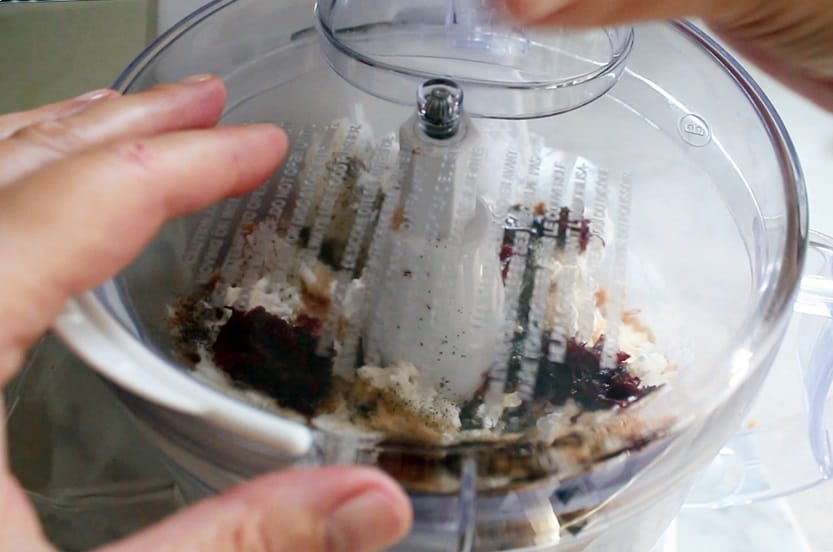 Pulse in the food processor until mixed together and sort of chopped up but still retaining much of its texture. 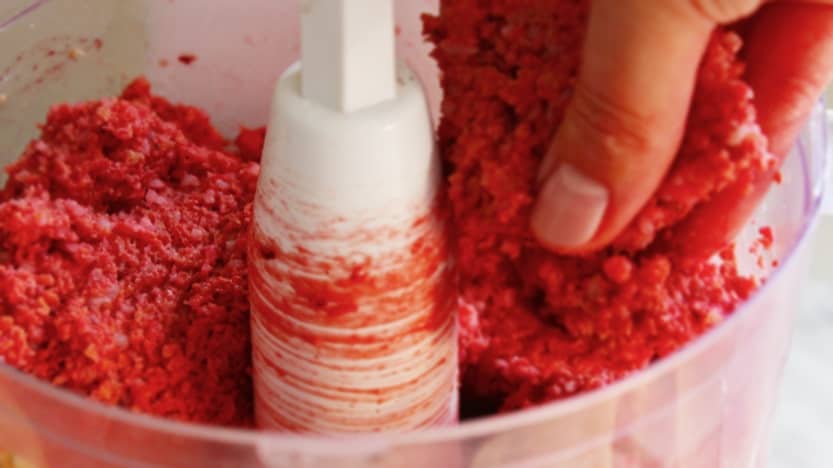 I blended mine just a tiny bit too long but it still worked well. Just form it into patties like you would with any other mix. I love using this burger press. It makes the perfect sized patty and is simple to use and easy to clean. 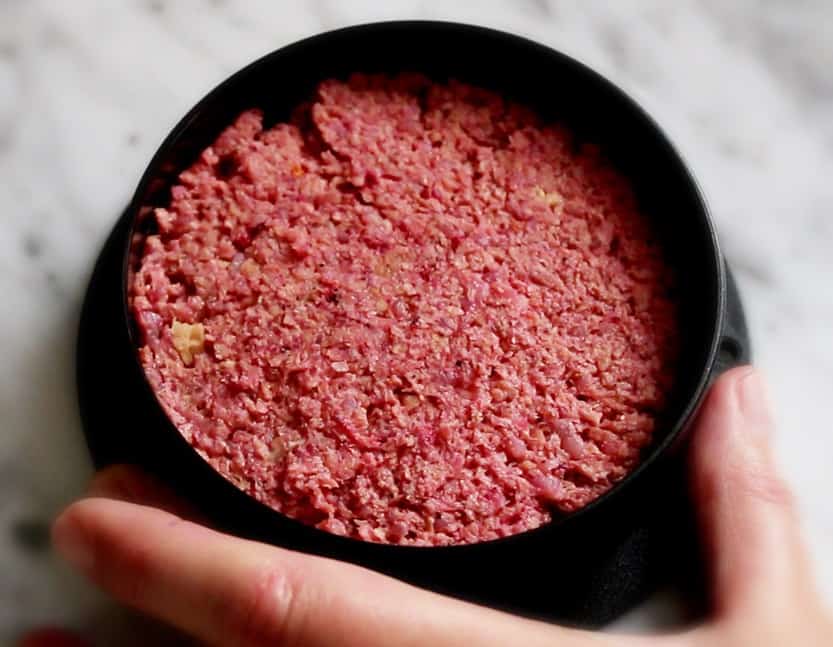 Or just make your burgers by hand. It’s all good. 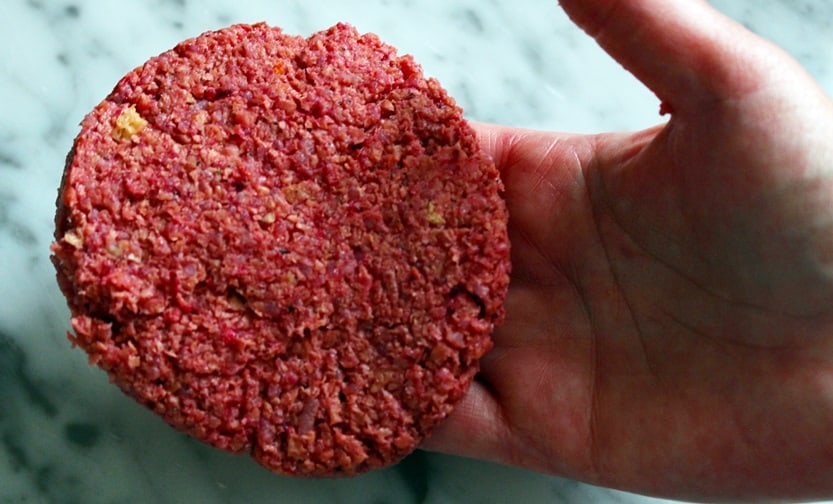 Look at the texture. I wish you had feel-o-vision. It’s chewy, meaty, a little stiff and stretchy. If a real burger experience is what you’re going for then this is awesomely close. 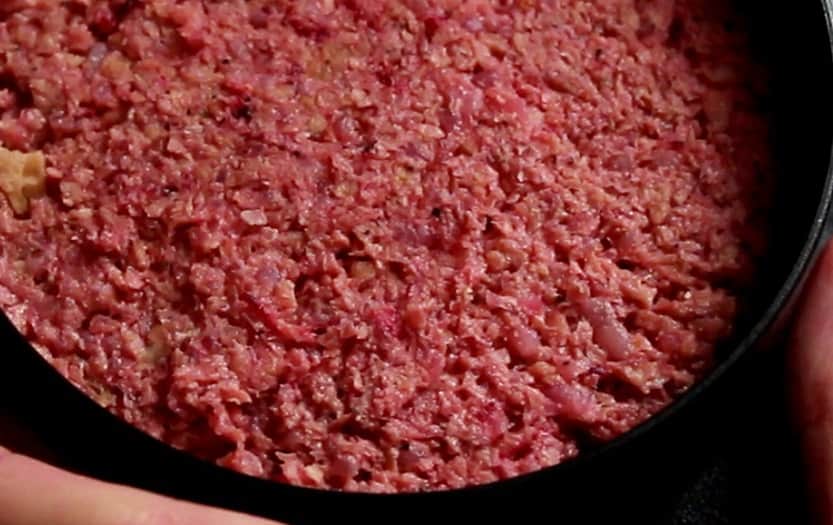 Just fry it up using your preferred method. I used oil but you can go without. 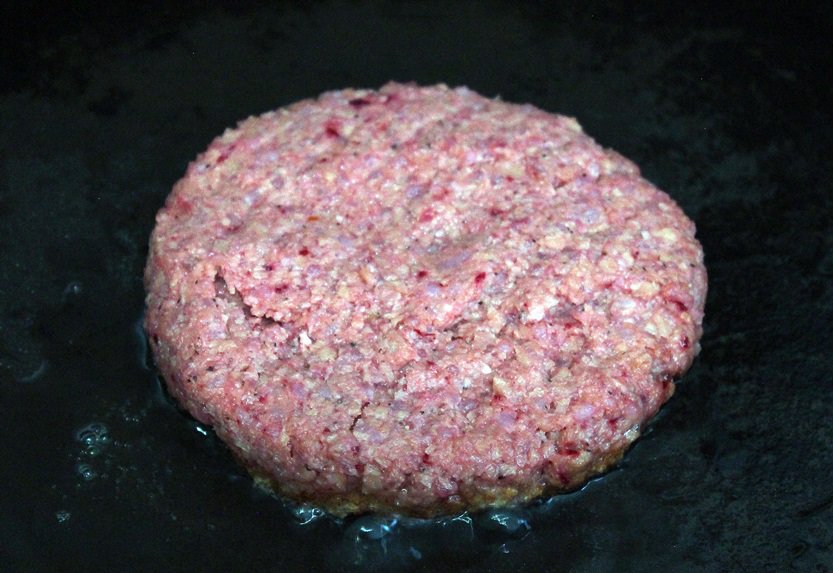 Crisp on the outside and firm and chewy on the inside. 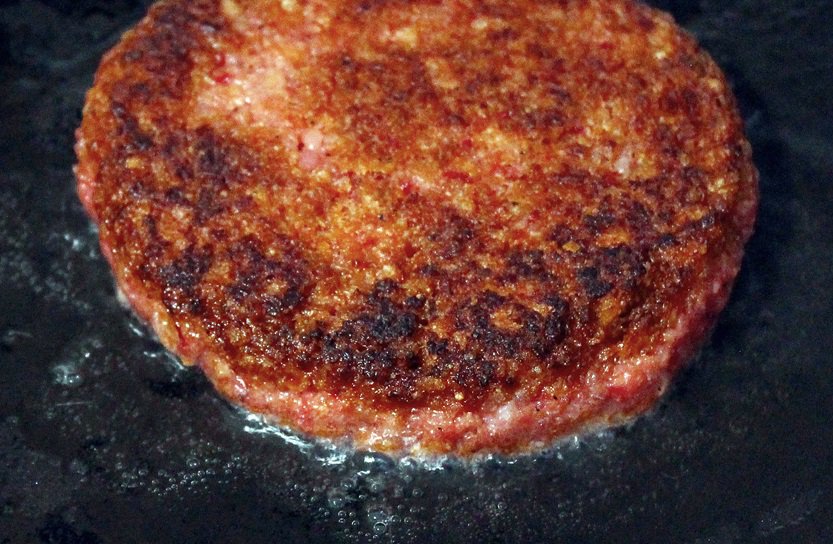 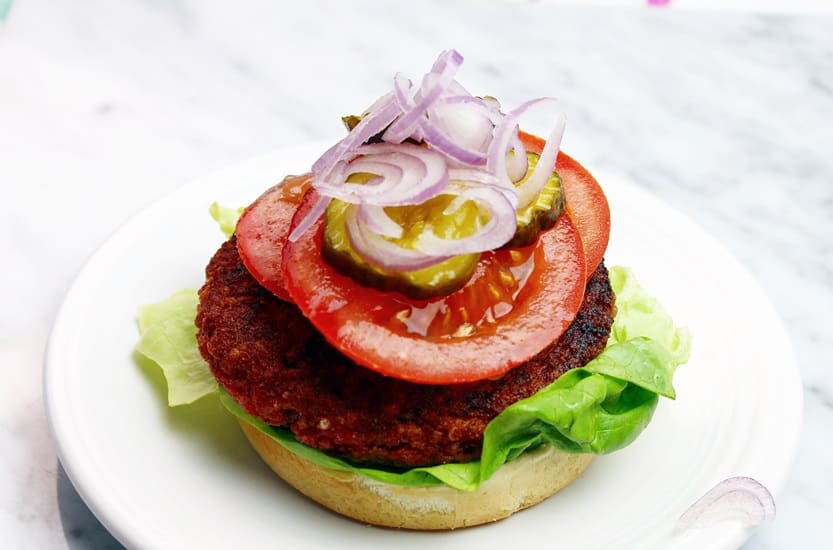 And voila. Your own, DIY Make at Home Impossible Burger 2.0. 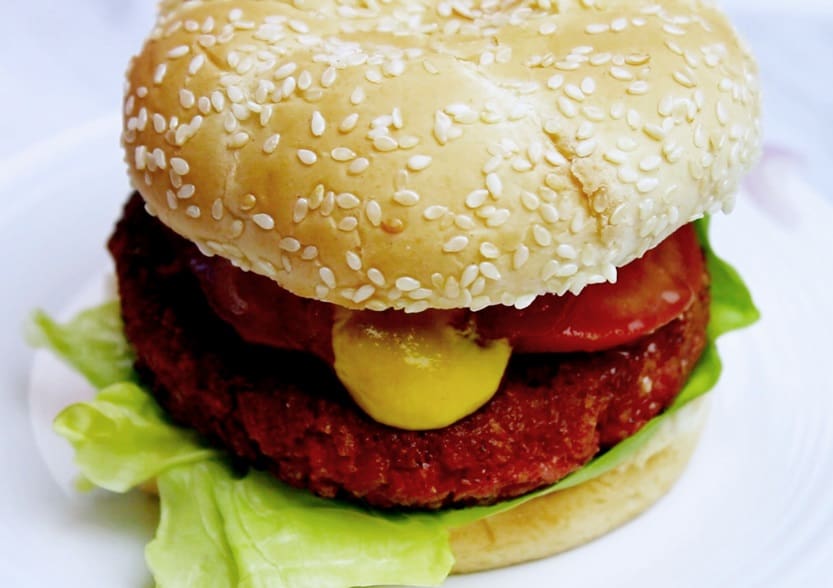 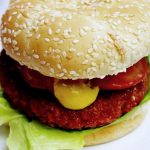 This DIY Impossible Burger 2.0 is easy to make at home using commonly found ingredients. It's vegan and gluten-free, too!

And here’s the recipe video!

You can also try my other version of The Impossible Burger here:

This I’m Possible Burger is a great imitation of the the Impossible Burger and the Beyond Burger, and it’s both simple and inexpensive to make at home with common items from your local grocery. 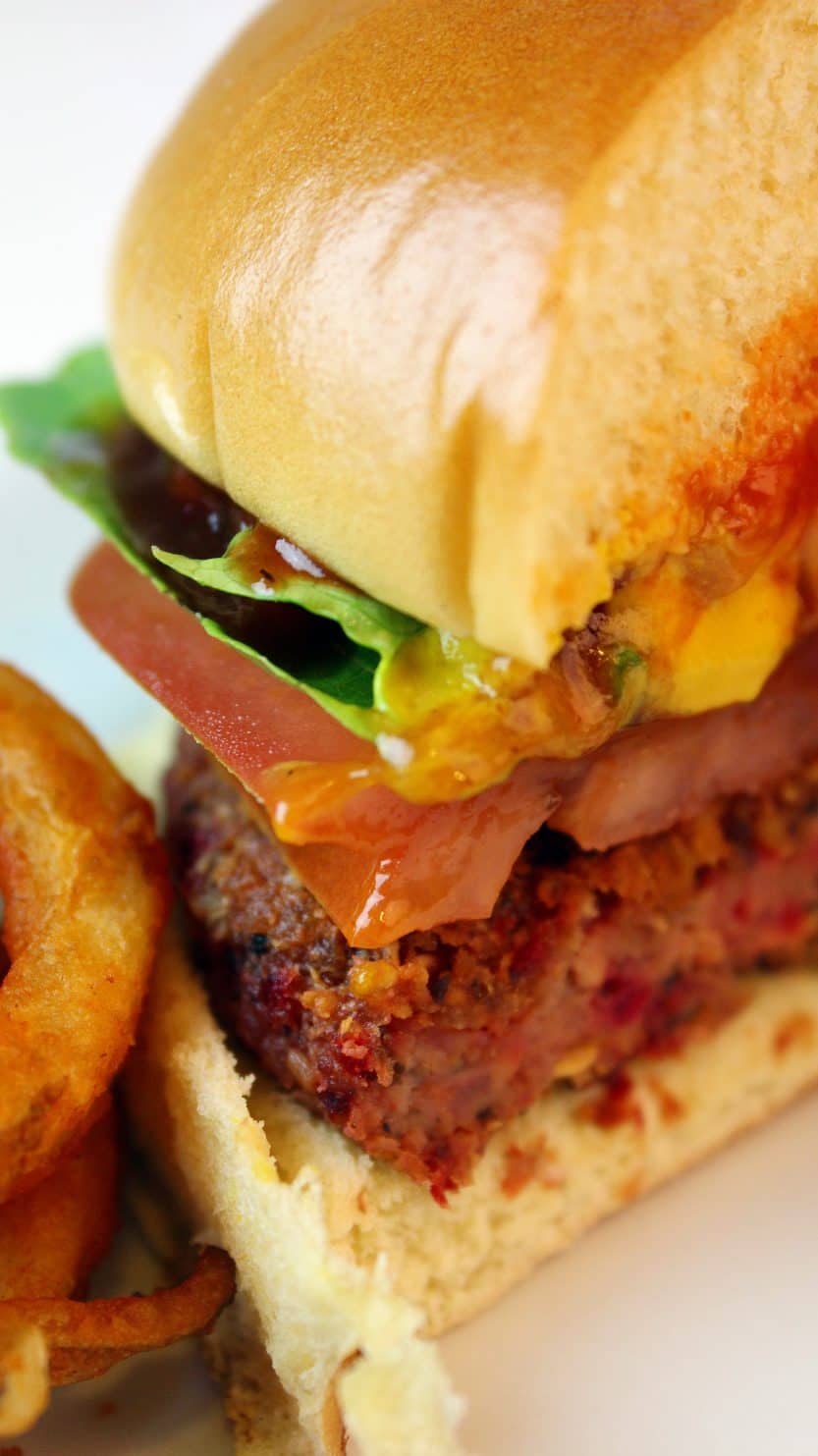 I made these tonight for dinner. Followed the recipe but used plant-based red food coloring instead of beets. And, I didn’t have short-grain rice, so used long grain brown rice.

After I made them I put them in the fridge for about an hour so the coconut oil could firm up a bit.

I grilled them and was amazed that they held up on the grate. I took a pic but I don’t see a way to share a photo here.

I have the following questions:

1) The outside was crispy, but the inside was mushy. Maybe it was because I used long-grain rice? Or maybe I tried to cook them too quickly and needed a lower flame?
2) I’ve never had an impossible burger because I find the smell of them to be rather disgusting. I have grilled Beyond Meats, Beyond Burger and Beyond Sausages, and they sizzle and cook more inside and out when being grilled. I was hoping this recipe would come close to mimicking that, but it didn’t. What have other’s experiences been with this recipe? Has anyone tried increasing the amount of coconut oil to see if that helped the inside cook more?
3) I kinda liked the flavor of this recipe better than the Beyond Burger, but the texture wasn’t nearly as good. I would love to know any tips people have to improve the texture and more evenly cook the inside of the burger without drying it out.

I look forward to everyone’s input and feedback.

Yes, the short-grain rice helps these stick together better and are a lot less mushy. Lower flame also helps. The inside needs enough time to get rid of some of that moisture. Also, letting the burger mix rest and chill in the refrigerator for 20 minutes before making into patties also helps.

I’m glad you enjoyed the flavor and the above suggestions may help you perfect the texture!

Sure, I think they’d work just fine. It’s a forgiving recipe, too.

Can they be frozen to cook later?

They can be. You can cook them first or not. Either way … Just wrap them up we’ll with plastic wrap and put them in the pan frozen.

Could you use beet powder instead of the beets?

Oh absolutely. Just a little would be all you need. It’s for color.