These vegan grits with dried cranberries and sliced almonds are super easy to make in just a few minutes. They’re delicious and healthy, too! 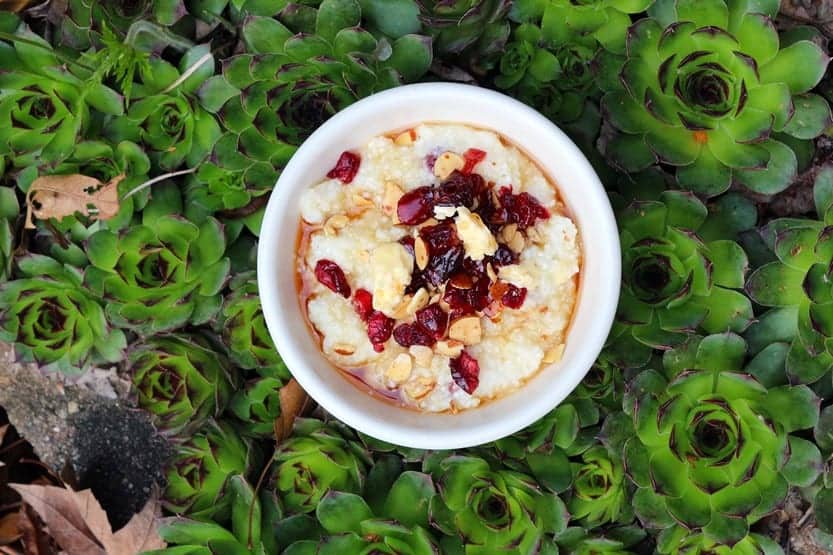 Vegan Grits are Healthy and Delicious

We all know oatmeal is a fairly healthy way to start the day. But did you know grits are a delicious and nutritious competition? 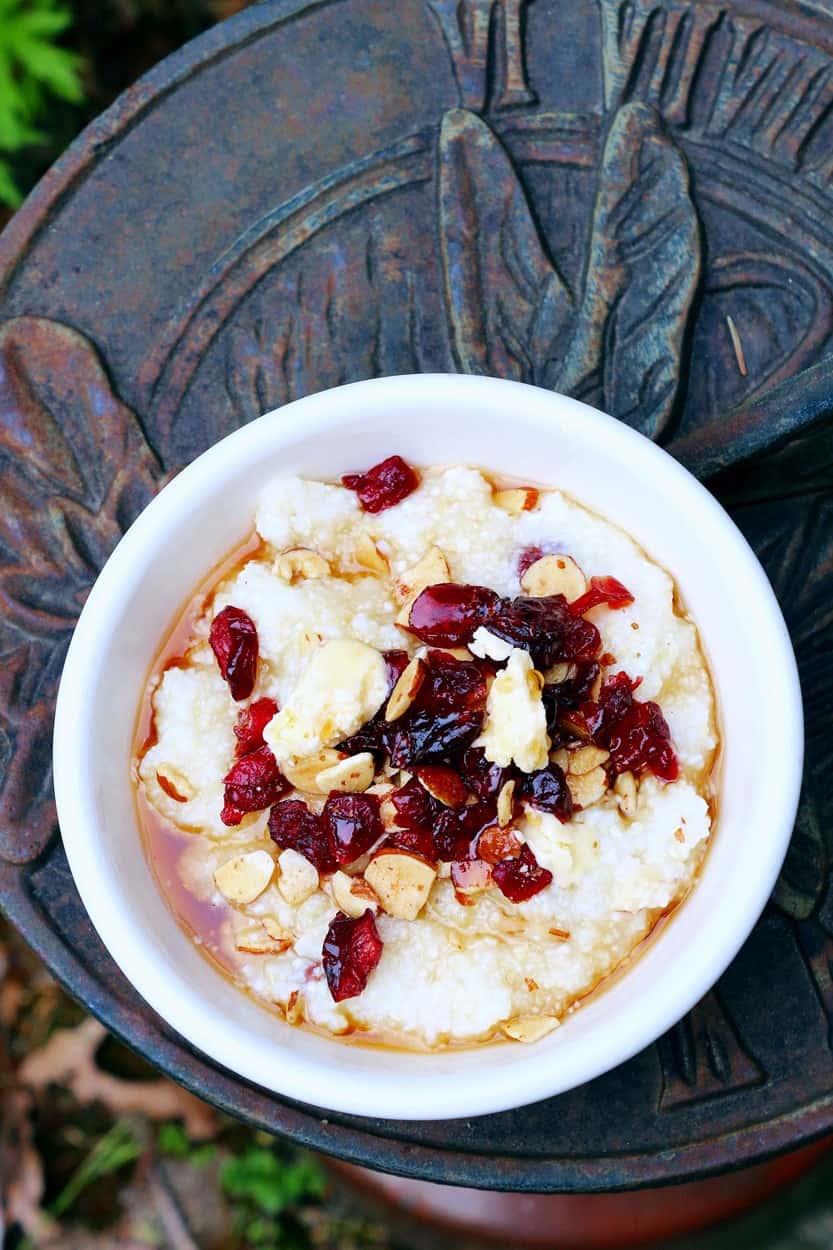 Grits are basically dried cornmeal. The hull and kernel are usually removed before drying. Once fully dried, they’re ground up and can be rehydrated easily, usually by boiling. They’re not just used in sweet dishes, either, Savory grits are also awesome.

Cornmeal, btw, doesn’t come from the juicy and tender sweetcorn you’re familiar with in the summer. It’s made from a different kind of corn that’s allowed to mature on the cornstalk until it dries naturally. This is then used to make grits and a lot of other things.

Grits are a traditional dish in the southern part of the United States. Most restaurants serve them in that region, with many doing so as a side dish that just automatically comes with any breakfast.

They’re great for breakfast, for sure, and can be embellished in endless ways. I added a few tablespoons of dried cranberries and sliced almonds along with a bit of Earth Balance vegan butter and some maple syrup. 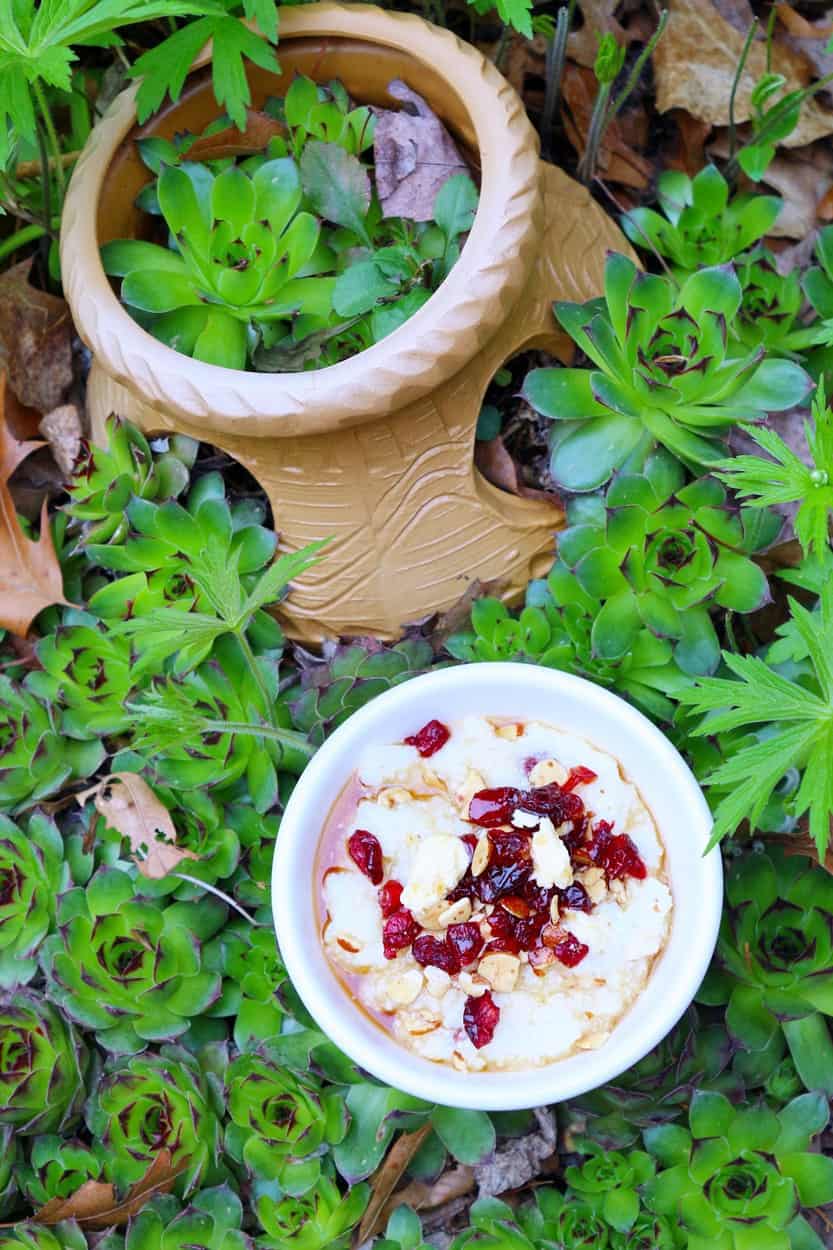 How to Cook Grits

Cooking grits is basically cooking polenta, another awesome and tasty cornmeal dish. There are several different kinds of grits and they will have slightly different cooking methods and times depending on how much they’ve been processed.

Start with good quality grits. Here are a few choices to get you started …

For any grits, the best bet is to follow the directions on the package. Here are a few more tips to get the best results.

Add the grits to the water slowly, stirring continuously. Stir very often during the cooking to make sure there are no clumps and it doesn’t stir to the pan.

Use water or plant-based milks for the liquid. Milks will make the grits a little creamier.

Place grits, water or milk, and salt in slow cooker and heat on low for 7 hours or overnight. Use a 4 to 1 ratio for water or milk to stone ground grits.

Place grits, water or milk, and salt in Instant Pot and cook at high pressure for 10 minutes. Use a 4 to 1 ratio for water or milk to stone ground grits. 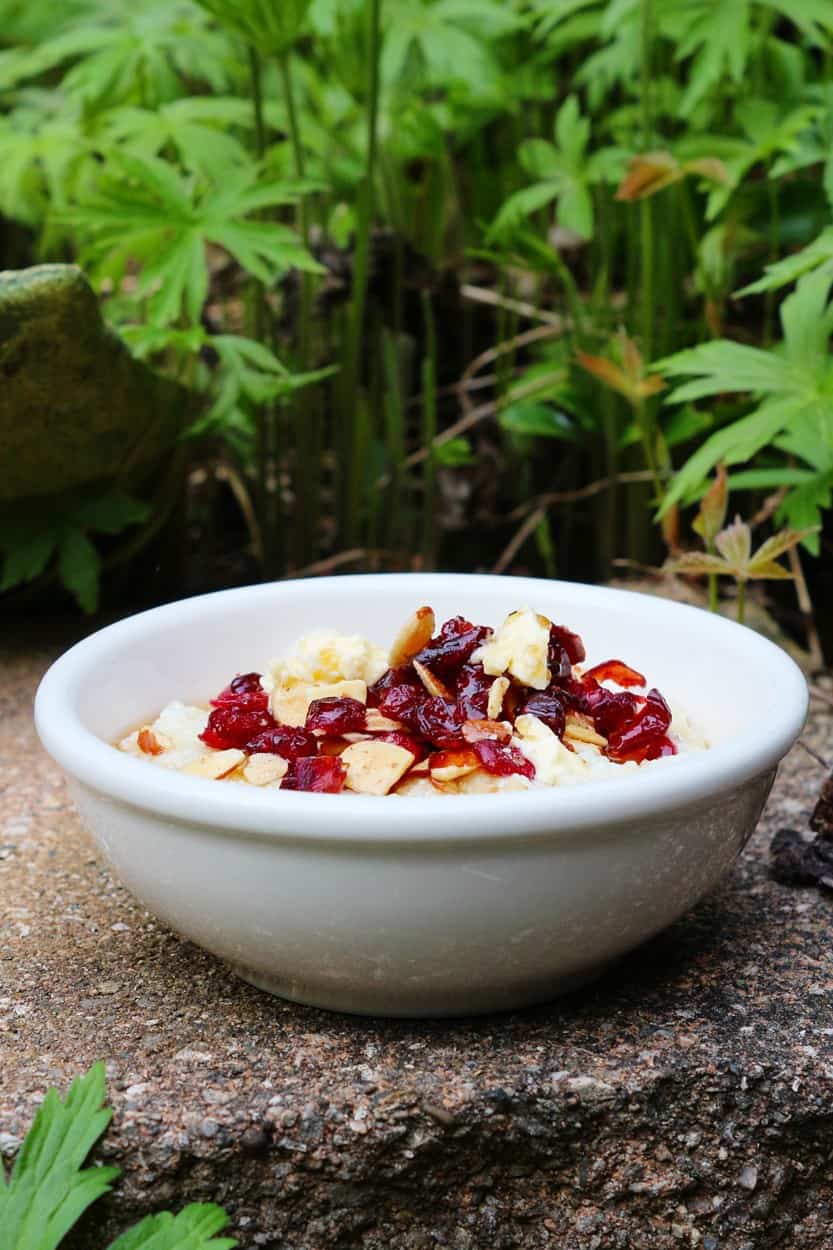 Yes, these are a thing. A delicious thing. Savory grits can start off with water or vegetable broth and common additions are vegan cheese, onions, and various vegetables. I love grits with grilled Brussels sprouts, asparagus, and onion with a little vegan cheese.

Here’s the “recipe” for this version of grits, but use your imagination, they’re delicious with just about anything. They go spectacularly well with a nice tofu scramble, or vegan sausage and gravy. 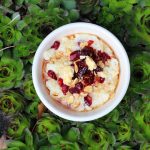 Vegan Grits with Cranberries and Almonds

Vegam grits are a fast and simple plant-based breakfast or snack. Add dried fruit and nuts or your choice of any tasty topping.

Nutrition Facts
Vegan Grits with Cranberries and Almonds
Amount Per Serving
Calories 245
* Percent Daily Values are based on a 2000 calorie diet. 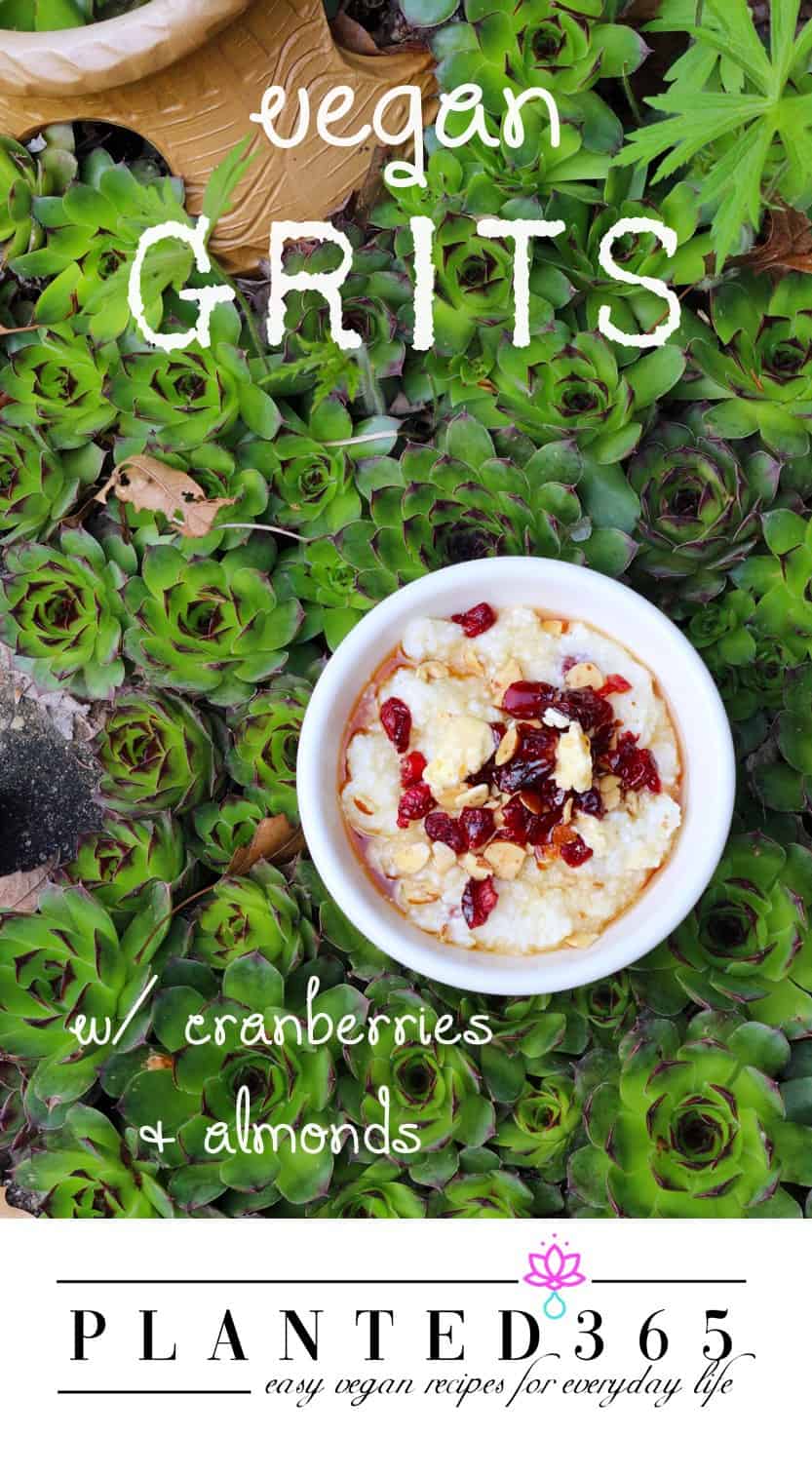 Try this dish with: 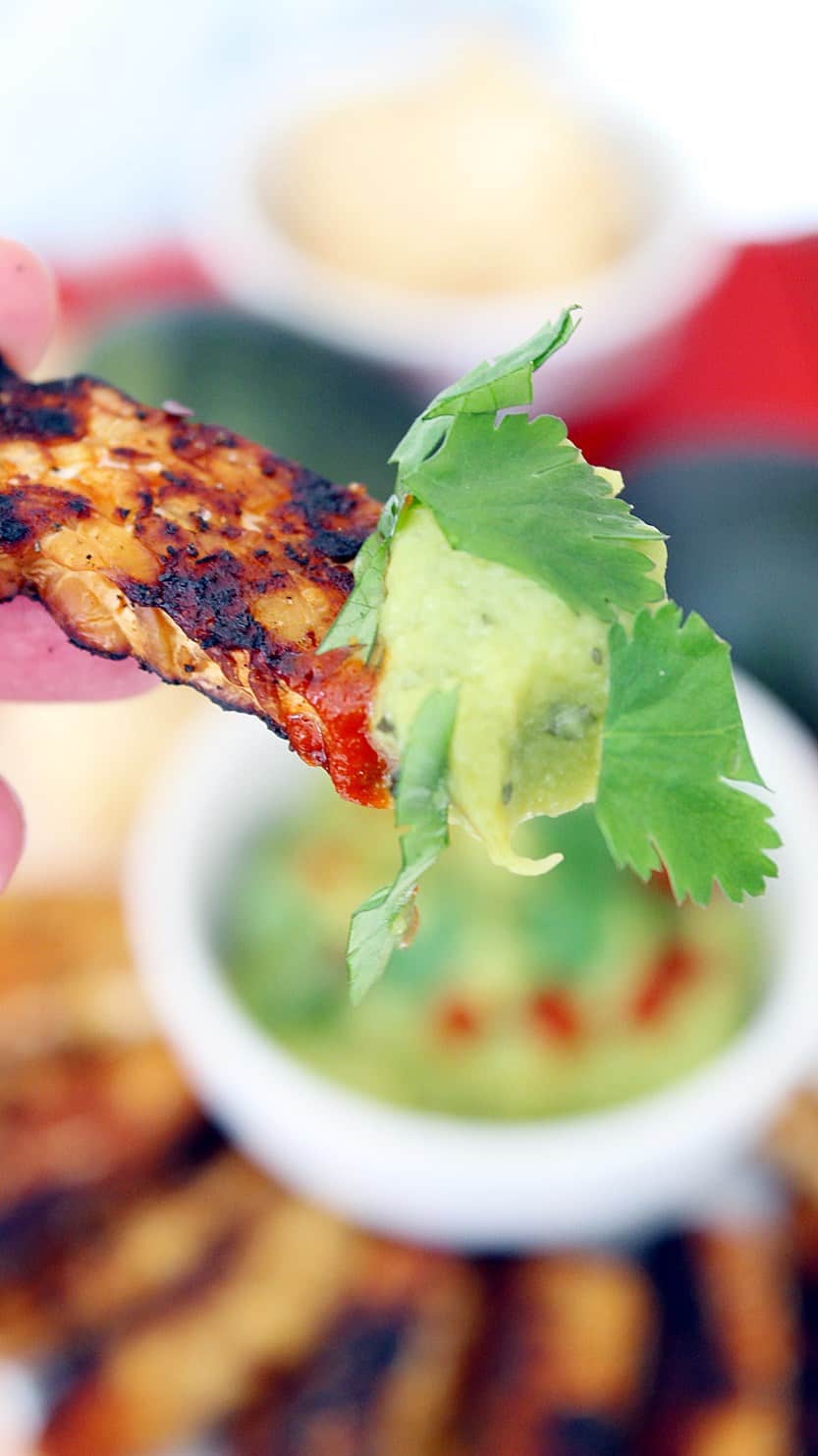 This vegan breakfast sausage is juicy, tasty, and delicious, just like what I remember my dad making us when we were kids. 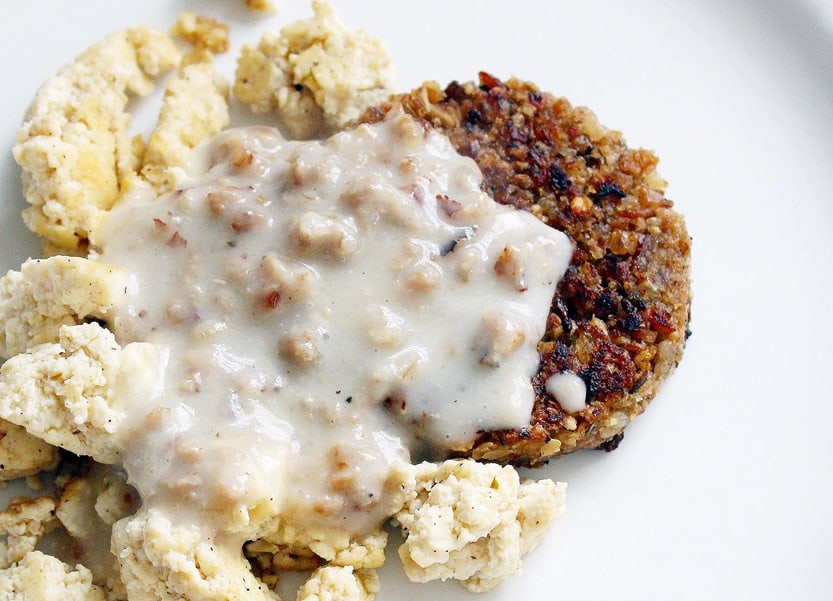 Savory Sweet Tofu Scramble. This was a wham-bam-thank-you-ma’am sort of thing I threw together for breakfast. But it turned out a lot better than I expected. Or I was really hungry. One of those. 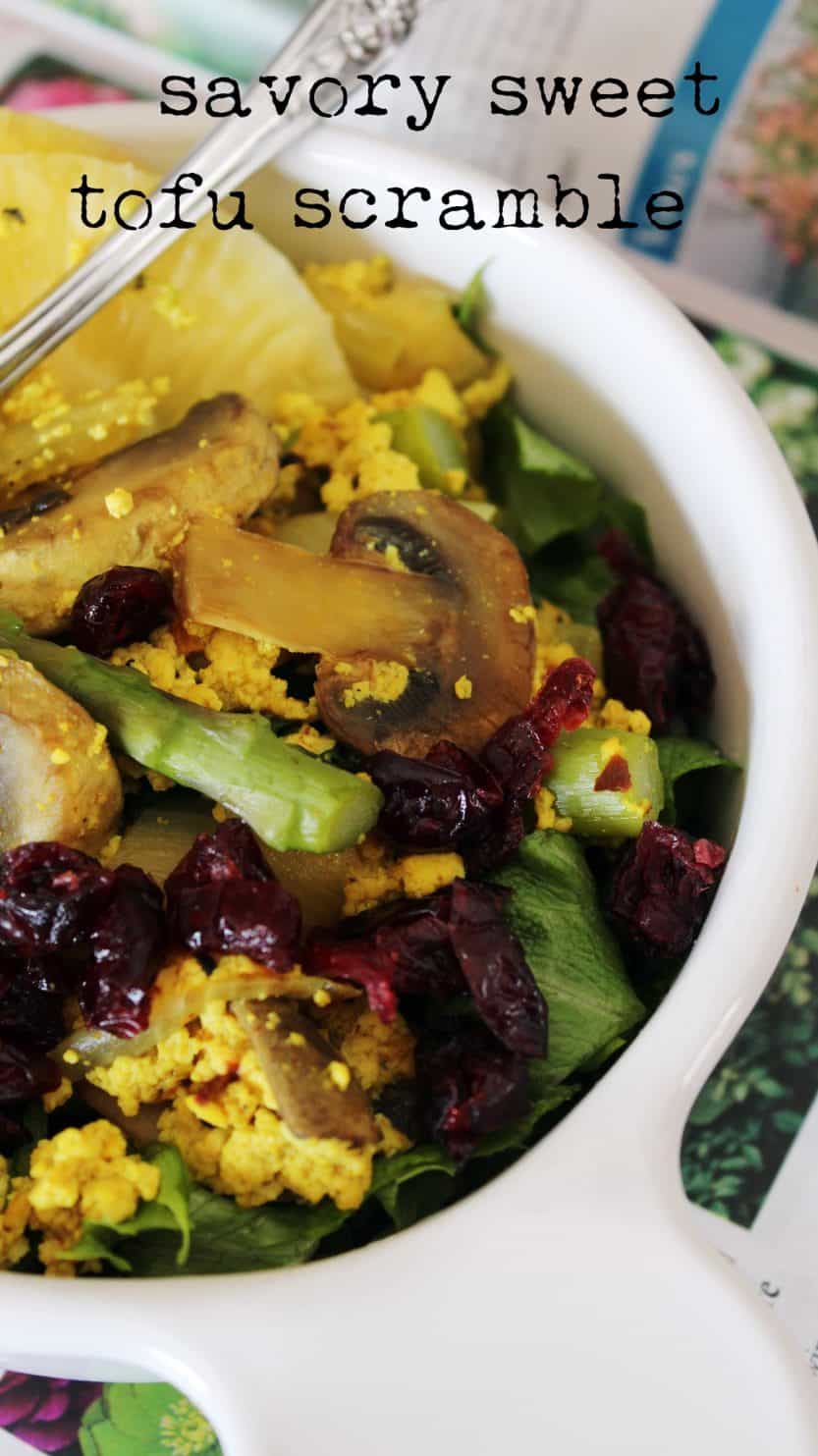