Vegan Sushi Bowl Deconstructed is a delicious and simple way to enjoy the flavors of vegan sushi. In a bowl. Deconstructed. 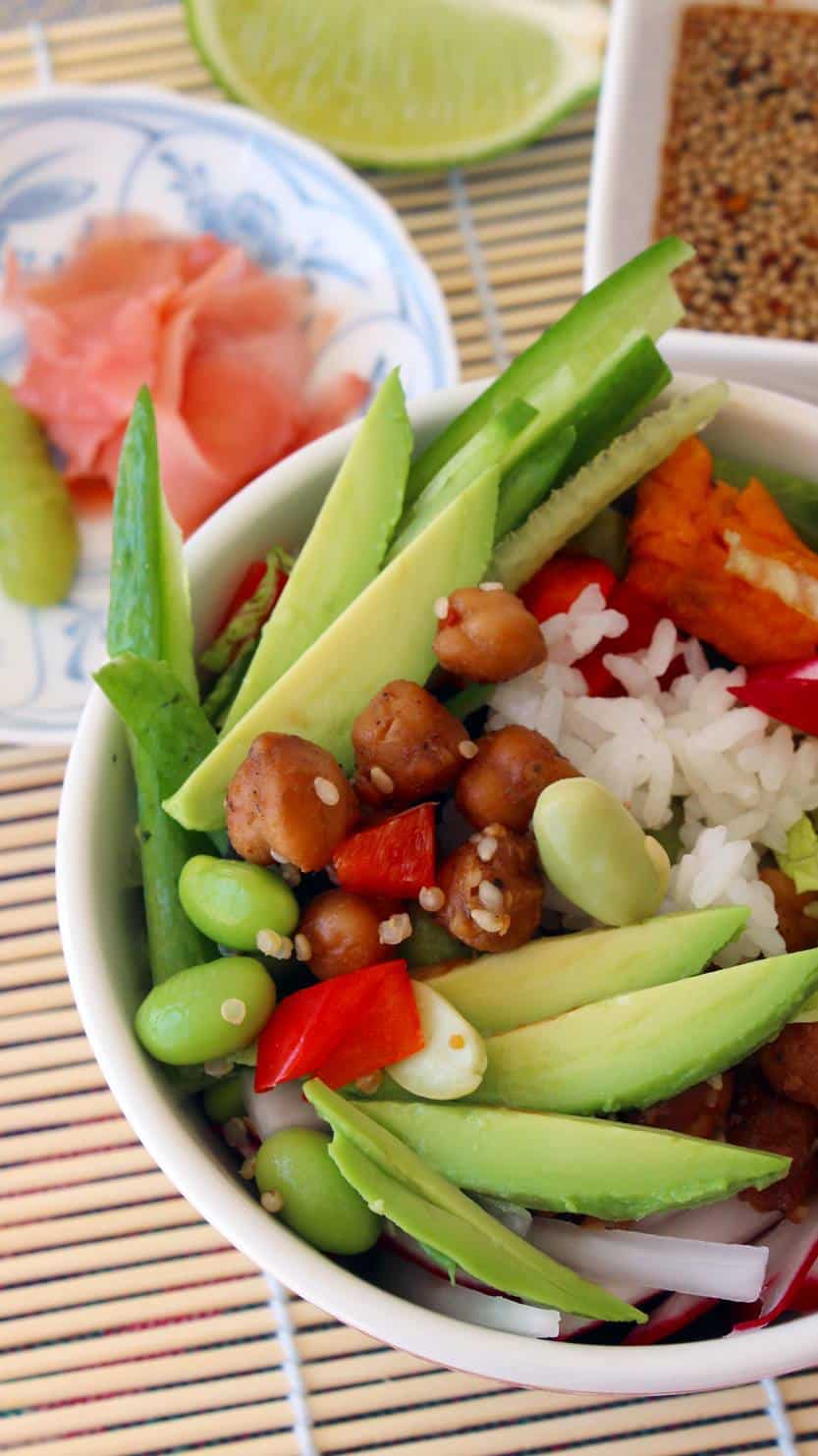 I love vegan sushi. It’s not that difficult to make regular sushi rolls, but sometimes we’re just too busy, right? So, that’s when something like these vegan sushi bowls really hit the spot. 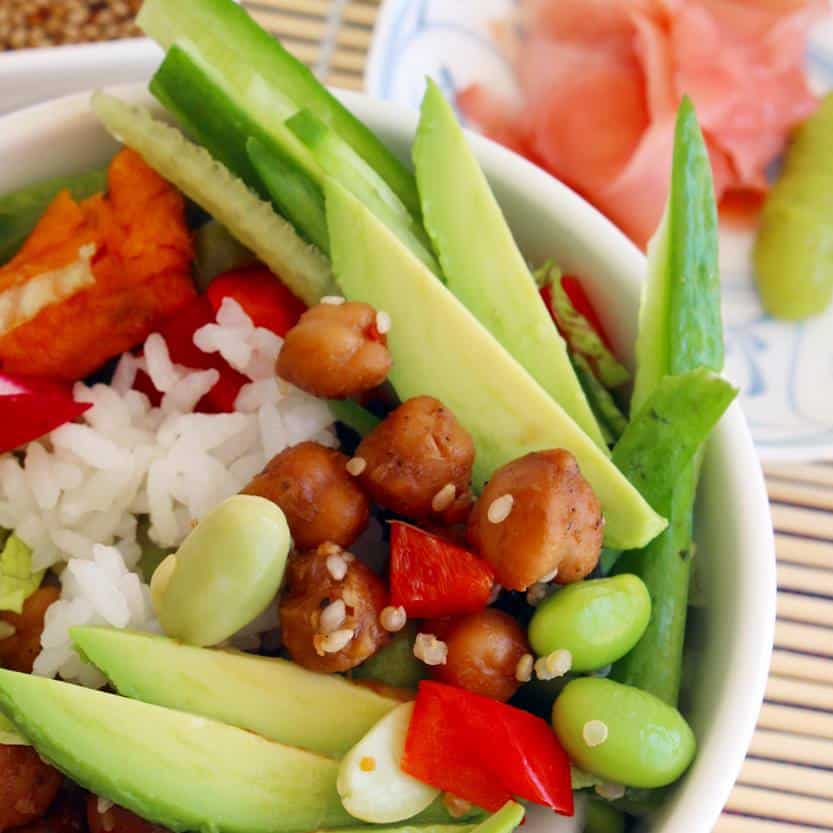 Sushi actually refers to the rice, so sushi rice is kind of redundant but is often labeled that way. I’ve used sushi rice but any short or medium grain “sticky rice” will do. Actually, to be honest, any rice would be fine in these bowls since they don’t have to stick together in a roll or anything. So use your favorite rice or just use what you have. These bowls are really easy to put together, too, once the rice is cooked and a few veggies are chopped. 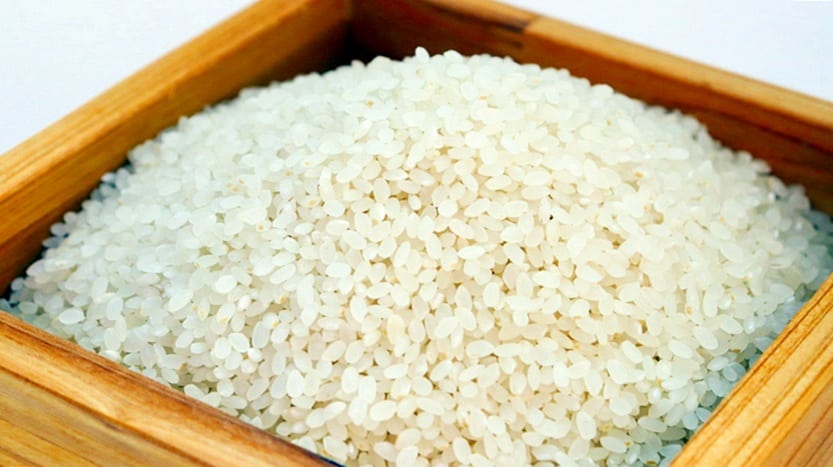 For the rest, I’ve used some shelled edamame, avocado, bell pepper, cucumber, sweet potato, radish, and spicy chickpeas. Asparagus would be nice, carrot, even beets would go well, too. Some wasabi paste, a bit of pickled ginger, and soy sauce are all you need to go with this. 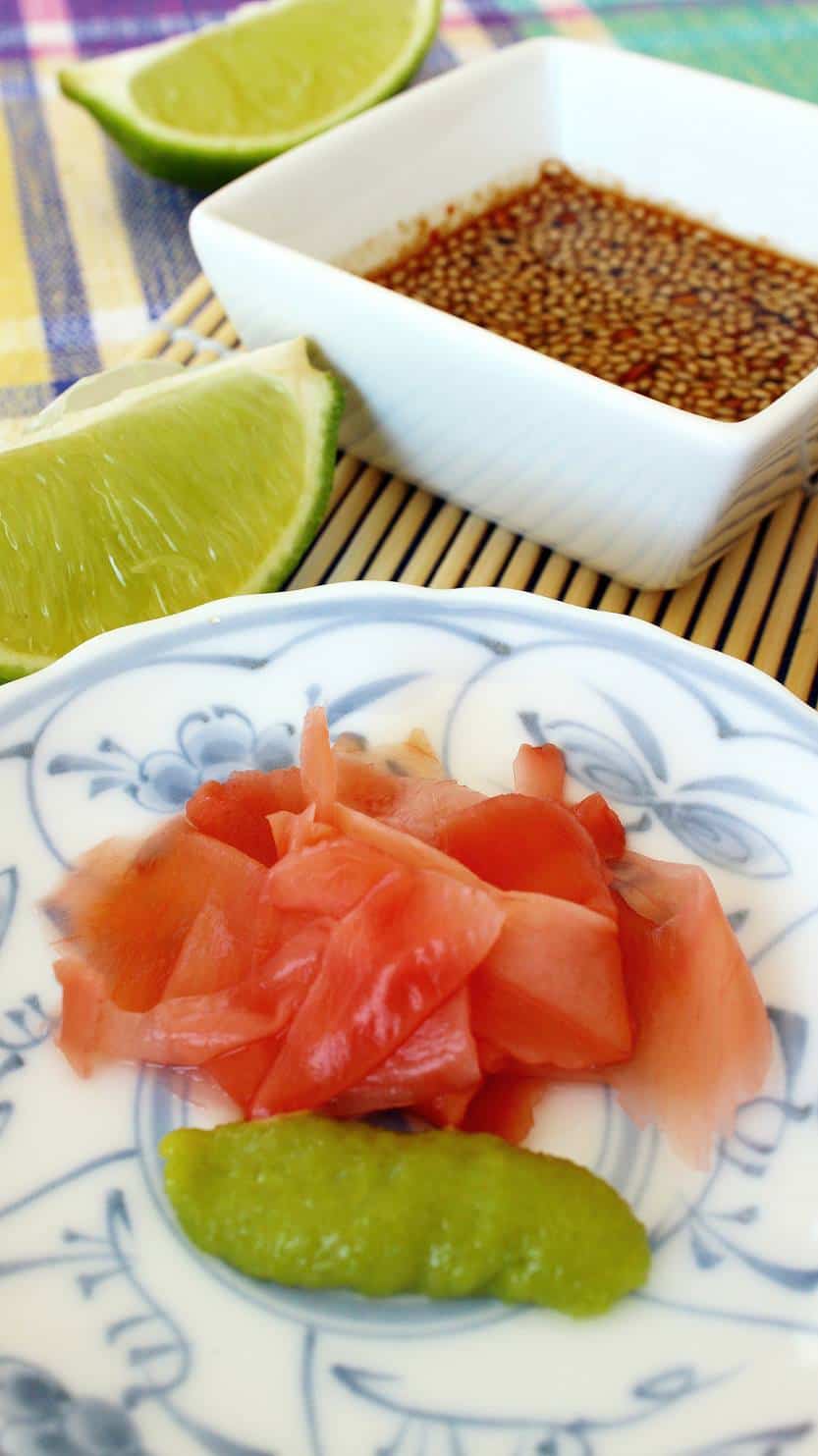 Wasabi paste is essential for this to feel sushi-like, though most commercially available wasabi doesn’t contain much or even any actual wasabi.

Turns out, wasabi is a rather delicate rhizome. In the Mustard family, it’s related to but less hardy than, horseradish and actual mustard. Real wasabi has a distinctive green color and less intensity than horseradish or mustard. The wasabi served in most sushi places that leaves your eyes tearing is usually a mix of horseradish, mustard powder, coloring, and maybe a little real wasabi. 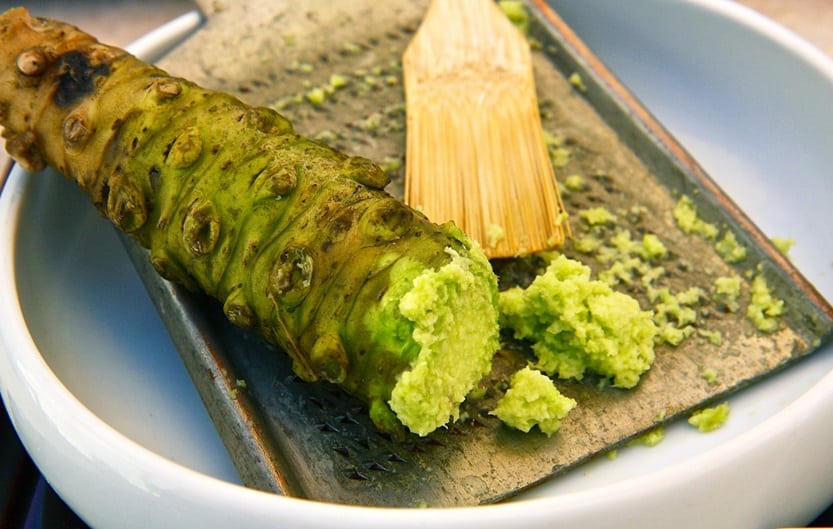 Interestingly, a couple of would-be engineers in Iceland are attempting to grow wasabi hydroponically and on a large scale.

For our purposes, though, the wasabi paste in a tube will do just fine. It’s generally mixed with the soy sauce and then the sushi rolls are dipped into the mixture.

Pickled ginger, also known as gari,  is also eaten with sushi, traditionally as a palate cleanser between sushi pieces. It comes in smallish jars, like this. 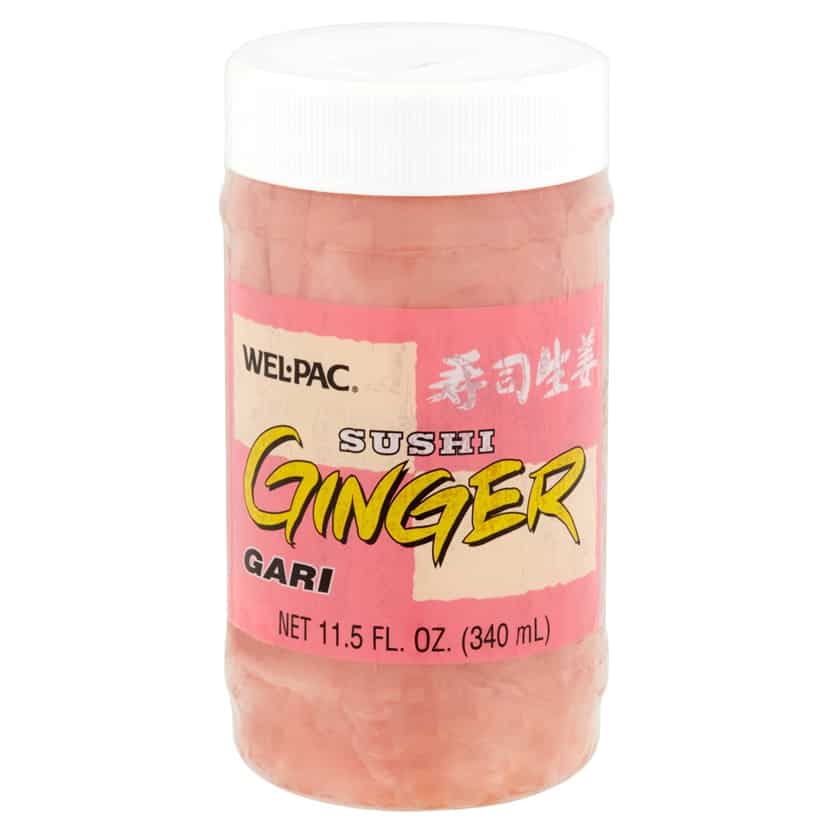 There is a sushi etiquette, but I’ll save that for an actual sushi post.  Anyway, if you’re a barbarian, like me, you pile on a bunch of fake wasabi and pink pickled ginger and num that up until your eyes water shut and you need to blow your nose. I know it’s not just me. 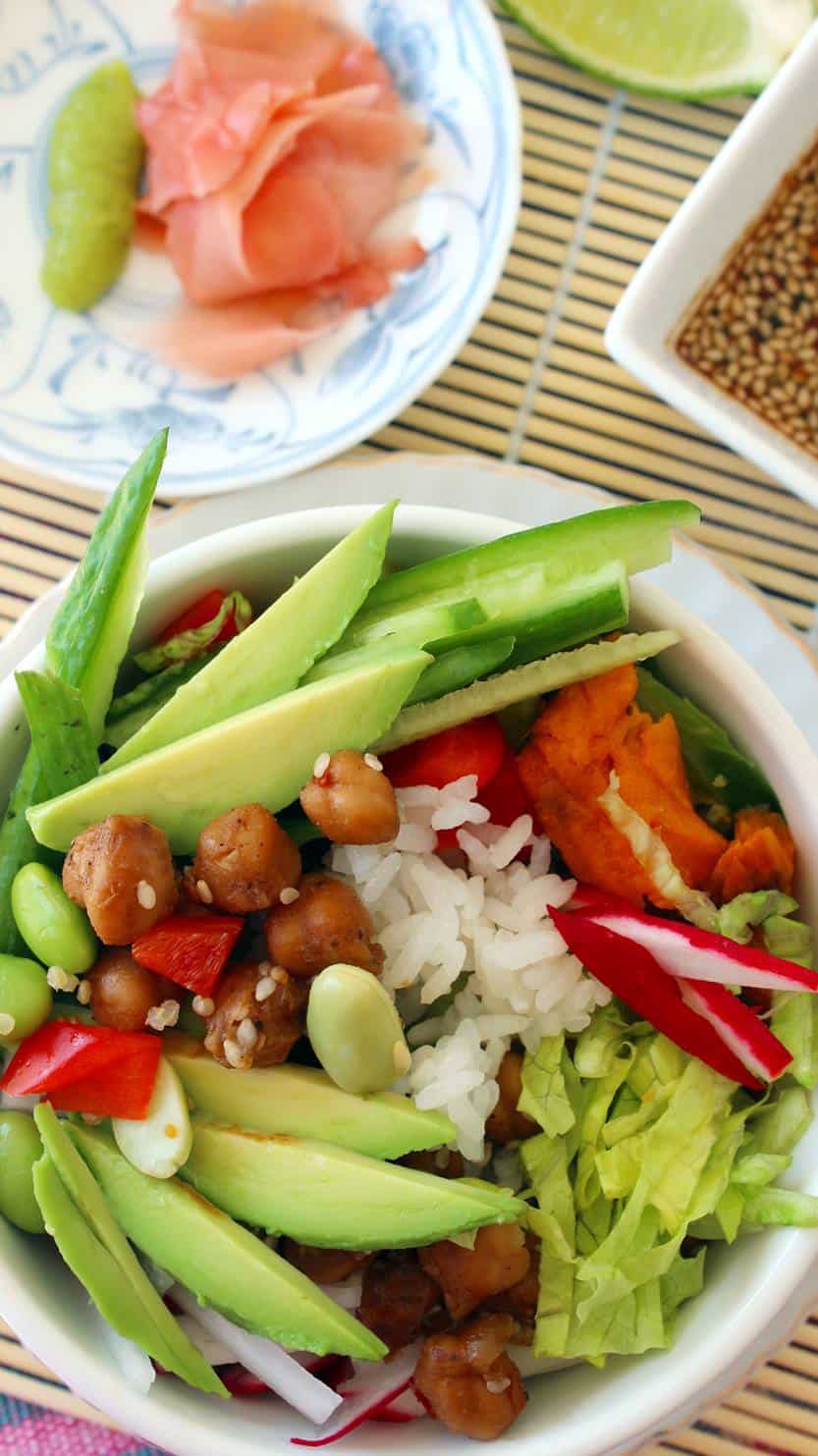 This vegan sushi bowl doesn’t need any sushi rules. Just pile it together, add as much ginger, wasabi, and soy sauce as you want, and enjoy.

A Lighter Soy-Based Sauce for Sushi

I love soy sauce, and use a gluten-free one all the time, usually just straight out of the bottle. But sometimes that’s just too much sodium and  I like to cut it a little with some orange or pineapple juice and then add a little ginger powder or fresh ground ginger, red pepper flakes, and stevia or sugar for a bit more sweetness.

Here’s the recipe, which is more of a loose suggestion. Use it with whatever you have on hand! 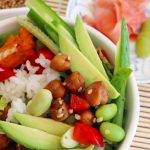 This vegan sushi bowl is delicious and easy to make with commonly available ingredients! 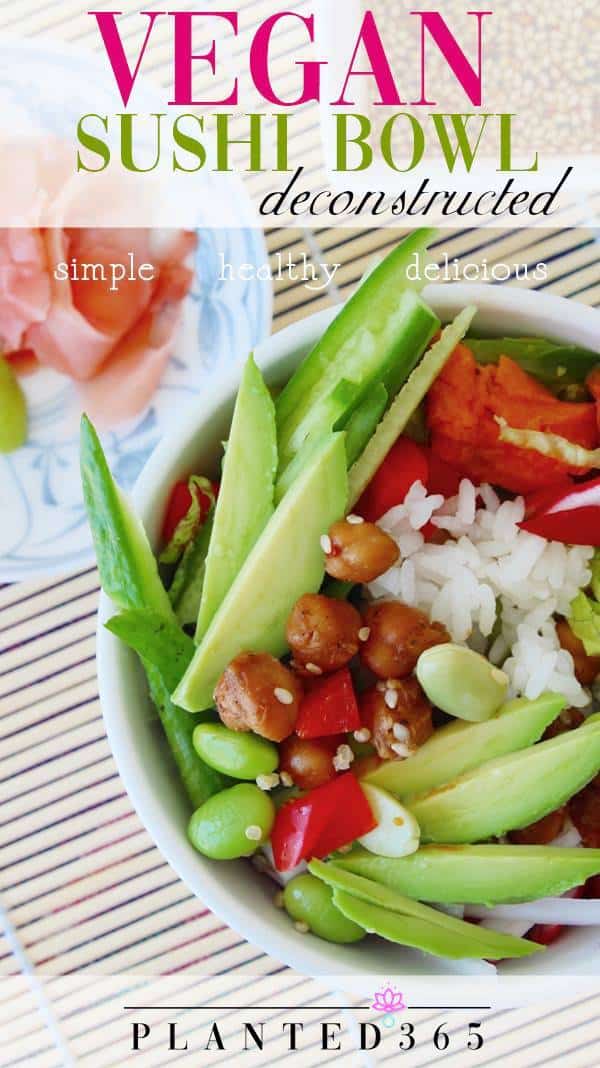 A splash of tequila with this super creamy dish will keep you full and happy and makes a perfect summertime dinner. 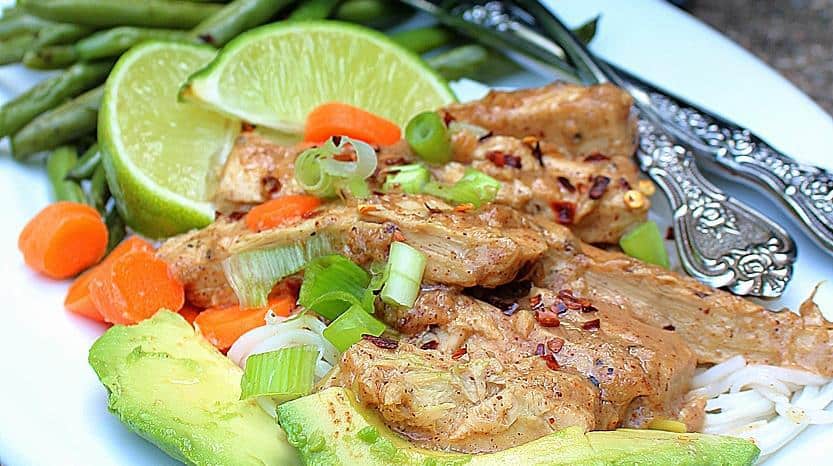 Yummy delicious sushi all mushed up in a bowl. So easy to make, too. Just start with a bowl of rice and add your favorite sushi fillings. 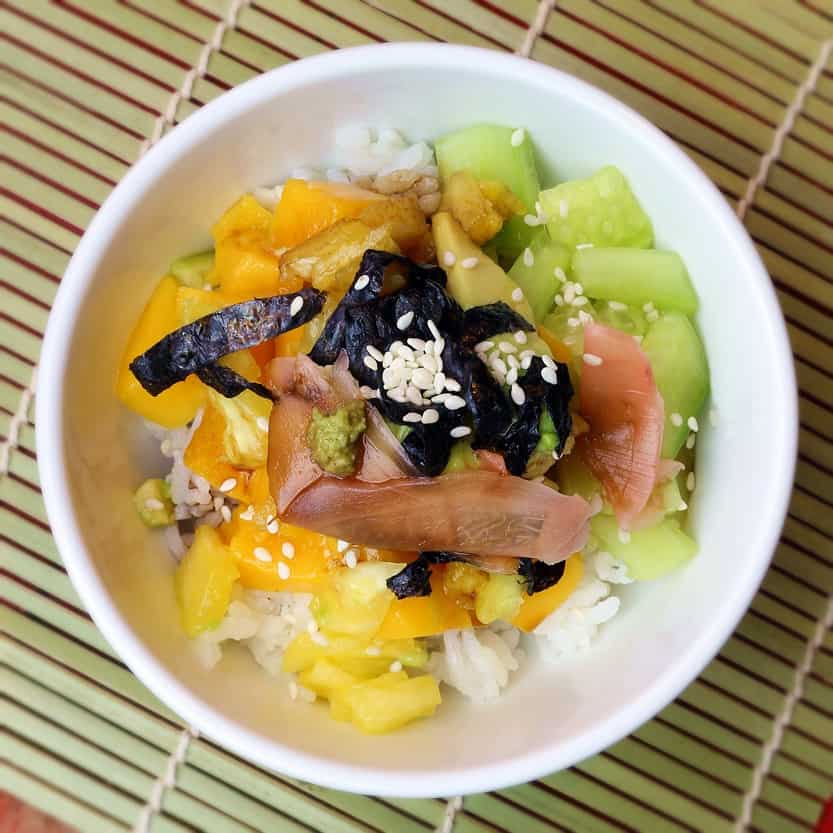