These are truly the best vegan mashed potatoes I’ve ever made.  Really. They’re both creamy and fluffy at the same time. And did I mention they’re vegan? 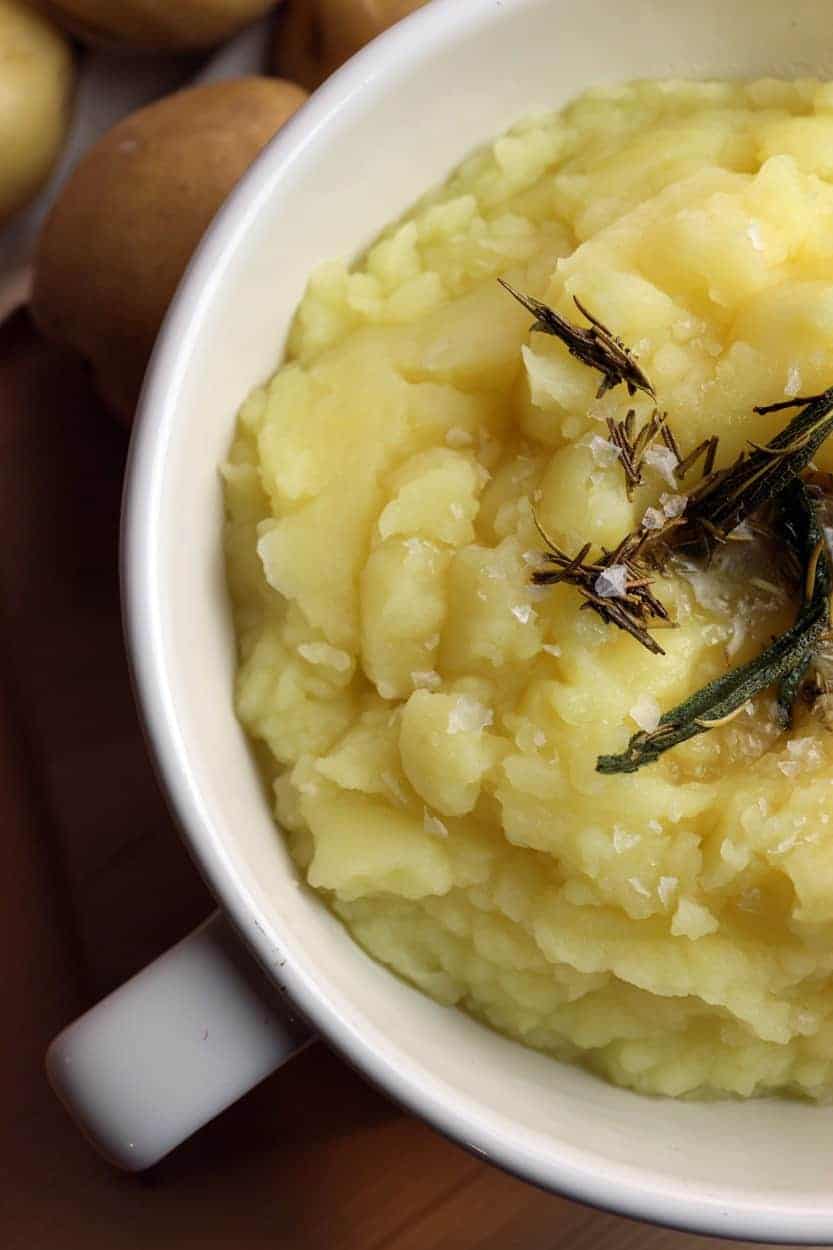 Everyone Can Enjoy Vegan Mashed Potatoes!

It’s not a big difference, really. Just subbing in plant-based milk and butter, which are easy to find today in most local groceries. The result is that small, but not small, difference can be a big deal to any vegan or plant-based eater who just wants to enjoy some starchy goodness with the ones they love. 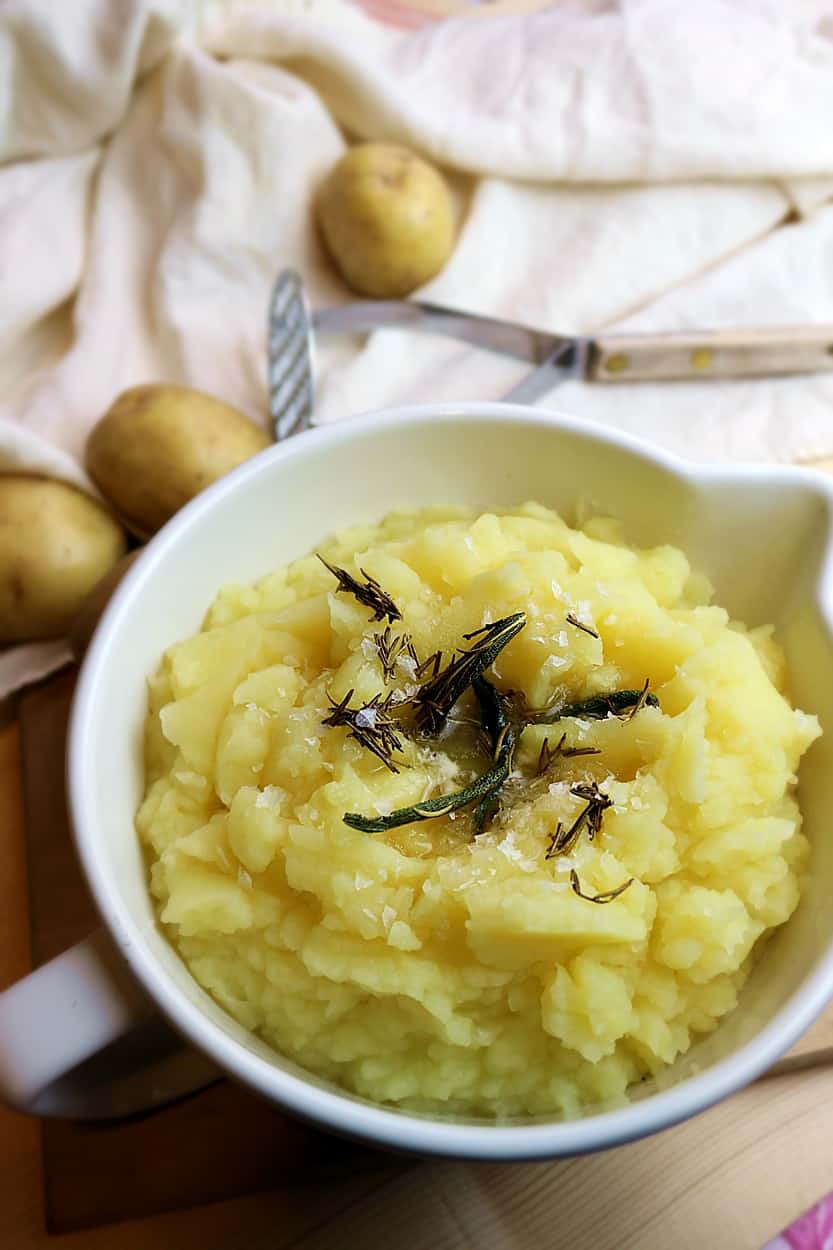 First things first. Can we talk potatoes for a sec? For awesome yummy delicious fluffy creamy and not gummy mashed potatoes, you need a good all-purpose sort of potato. I used Yukon Golds. They’re a light golden yellow on the inside, are creamy, and thin-skinned on the outside. 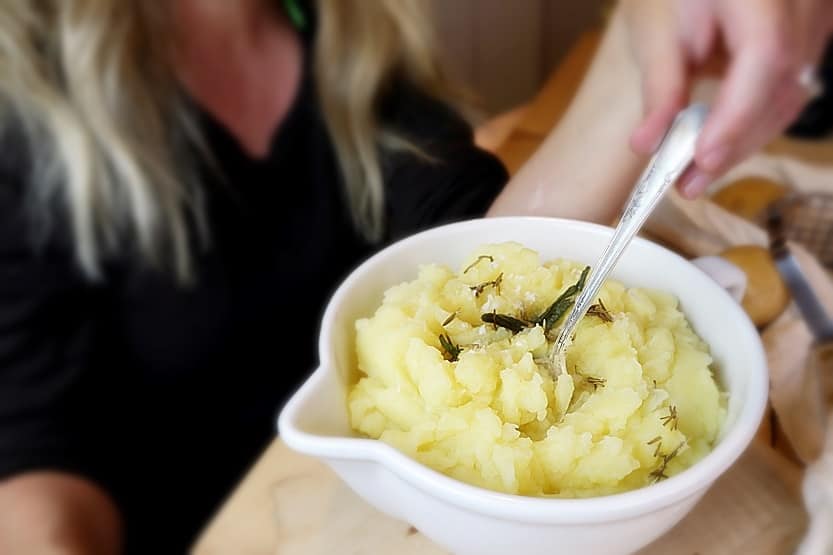 The Dish on Potatoes

Not all potatoes are created equal, especially when it comes to mashed potatoes. All potatoes contain a lot of starch. Only rice has more. It’s actually suspected that humans were able to evolve such big, fat craniums thanks to our ability to digest the high-quality calories in starchy plants such as potatoes. But some potatoes have more (and less) starch than others. Same goes for moisture content.

Waxy potatoes are lower starch, high moisture, and hold their shape really well. They’re not going to turn to mush once cooked and are good for casseroles, potato salads, roasting, boiling, and adding to soups and stews. Look for Red Bliss, Adirondack Blue (purple inside), Adirondack Red (pink inside … who named these??), Fingerlings, and Carola.  New potatoes, which are newly dug potatoes that have not formed all their starches (which takes about a week after they’re dug) are also considered waxy, regardless of variety.

Starchy potatoes are higher starch, low moisture, and so are great for frying as well as baking. They’re ideal for making French fries that are crisp on the outside and fluffy on the inside. This kind of potato is also delicious when baked and will be dry, fluffy, and flakey. These are also the kind of potatoes that are good for making potato creamy cheeses because it’s the starch that makes it nice and gooey. Look for Idaho Russet and Katahdin.

The Goldilocks of potatoes, the all-purpose kind are in between waxy and starchy. They have medium starch and medium moisture, so are able to hold their shape while still being a little fluffy.  They’re great mashed but can also hold up in potato salads and the like. Look for Yukon Golds and Purple Peruvians.

Green Potatoes: We’ve all found them on occasion and here’s what causes it. When sunlight hits potatoes it does two things. It causes the potato skin to form chlorophyll, which is green. This is harmless. But … sunlight also causes potatoes to form the toxin, solanine. So, when you see a green potato, it could also mean it contains solanine, which can cause stomach upset, headache, and other yucky stuff. There are acceptable levels of green in potatoes, but for me, they’re in the do not eat category. Ever. 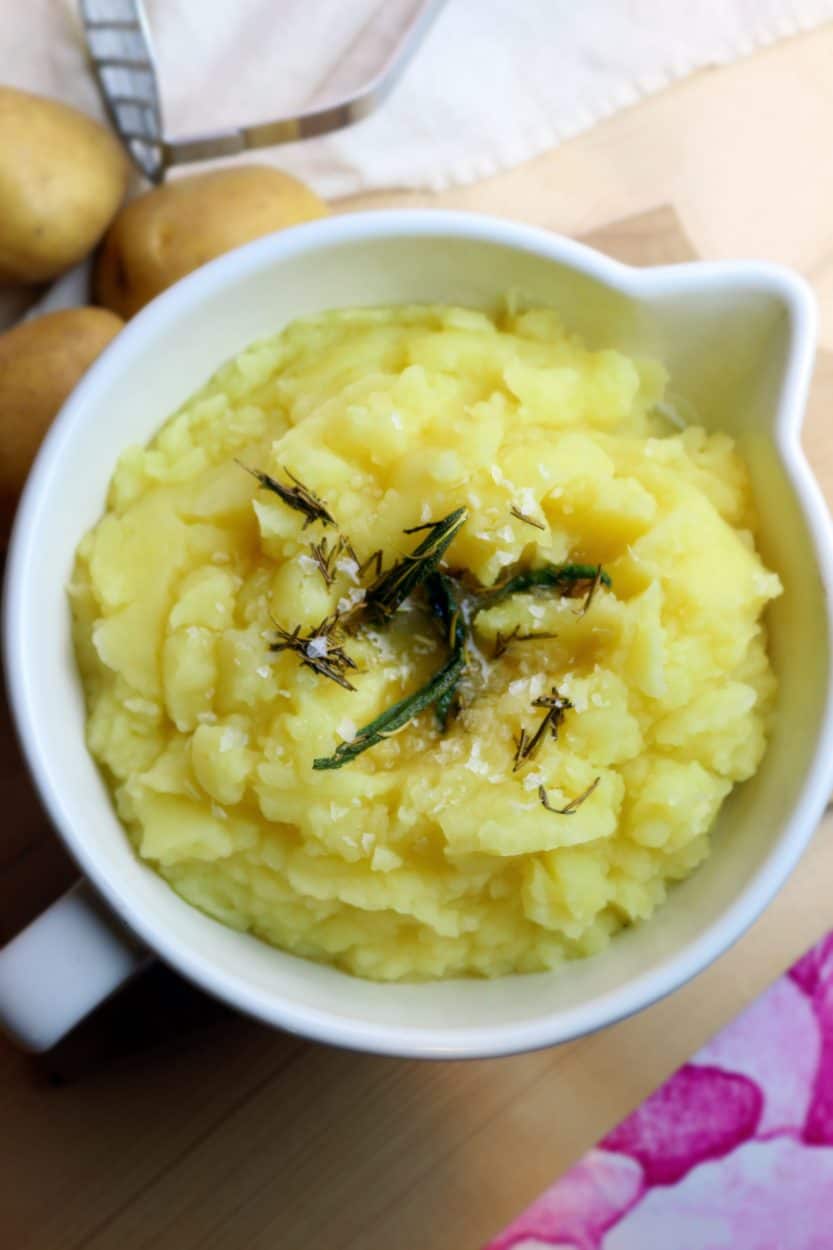 Plant-based milks are commonly available now in a wide variety of flavors and ingredients. For these vegan mashed potatoes, the ideal plant-based milk is going to be very pale, creamy, and not have much flavor. It also definitely has to be unsweetened and unflavored. No one wants vanilla mashed potatoes. Or coconut flavored ones!

I used So Delicious brand coconut milk for these. Coconut milk is pale and creamy, but some brands taste like coconut. This one doesn’t have much flavor at all and so is perfect for vegan mashed potatoes.

Hemp milk, unsweetened and unflavored, would be my second choice personally, but use your own favorite … keeping in mind how it may affect the flavor or appearance of your spuds.

Vegan butter used to be a mythical creature. As hard to find as a unicorn. But now there are usually at least one and sometimes several kinds in most grocery stores. We’ve come a long way, baby.

My favorite vegan butter for anything is Earth Balance, and that’s what I used here. You may have a different fave or other options available.

Basic mashed potatoes are delightful just as they are, but you don’t have to stop there. There are lots of flavor additions that will elevate the merely delicious to the sublime. Try these …

Add a head or two of roasted garlic. Yes. I said head, not clove. Roasted garlic is super mild and creamy. Follow these directions for roasting garlic, then squeeze from the skins and mash along with the other ingredients.

Chives or Other Herbs

Chives go with potatoes like peas go with carrots. Just snip some fresh and mix in, or use dried chives. Fresh herbs are less intense than dried. Use about 3x fresh compared to dried.  Or, use fresh rosemary and sage lightly sauteed in oil. Parsley snipped fresh or dried is also good.

There are several kinds of commercially available vegan cream cheese. All of them are good. I like Follow Your Heart brand. Just stir in.

Ever have a bagel with everything? The mix of garlic, black and white sesame seeds, etc? Try it in potatoes. There are packaged versions, or you can make your own. 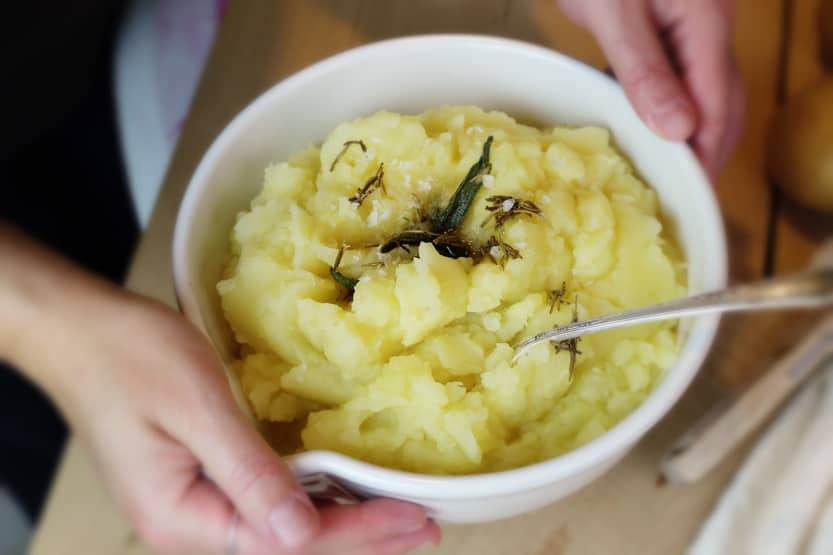 Mmm, there you have it … creamy, fluffy potatoes that anyone, vegan or not, can enjoy. Your vegan will thank you. 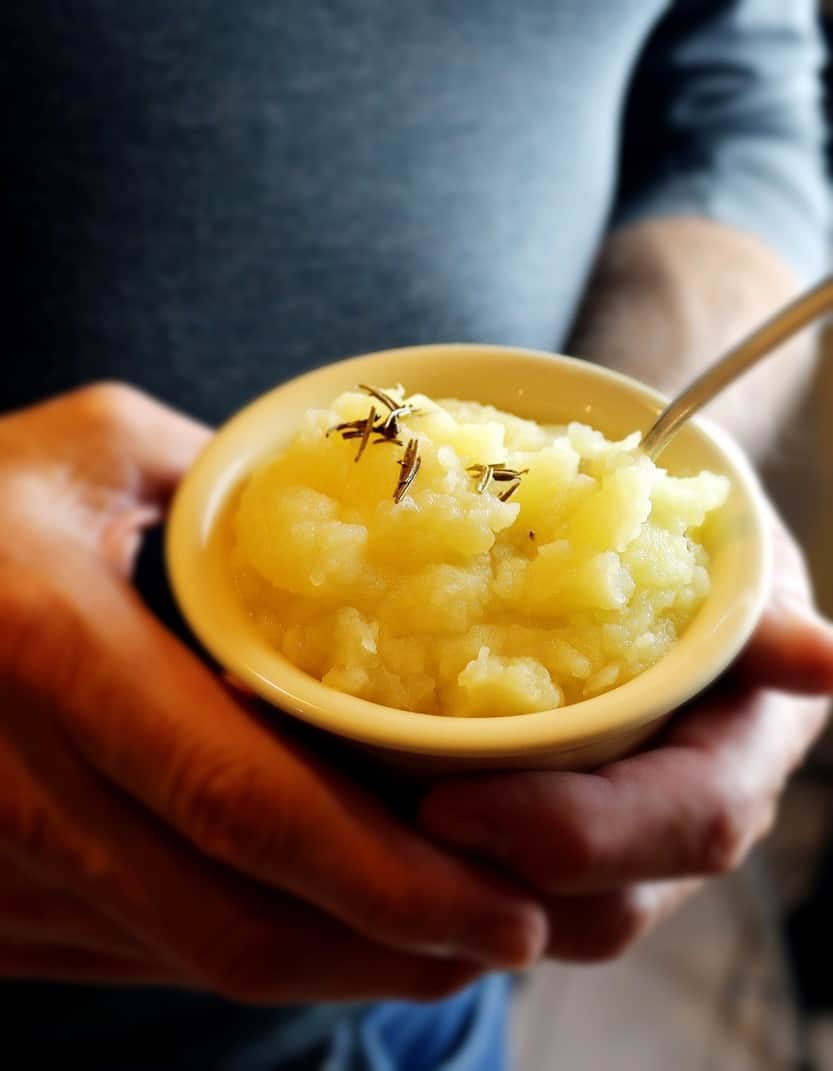 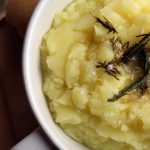 Coconut milk that doesn't taste like coconut works the best in this recipe. I use So Delicious brand. It's creamy,  pale, and doesn't have much taste at all.  Other brands can have a strong coconut flavor, which may not work for mashed potatoes. If not using So Delicious Coconut Milk, use your favorite unsweetened plant-based milk.


Warning: array_filter() expects parameter 1 to be array, int given in /home/customer/www/planted365.com/public_html/wp-includes/kses.php on line 1193