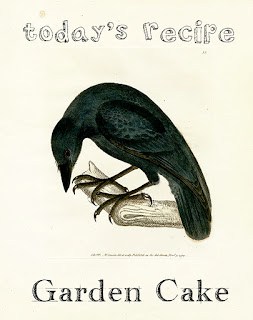 “If you look the right way, you can see that the whole world is a garden.”
~ Francis Hodgson Burnett, The Secret Garden

Something as simple as an empty wine bottle on a stick becomes beautiful in a garden.

These are Connecticut Field Pumpkins, which make great jack-o-lanterns. 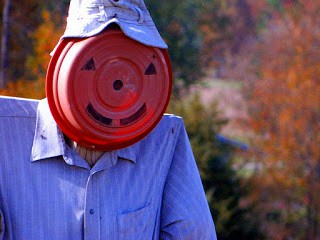 This friendly guy has stood watch over the garden for three years now. 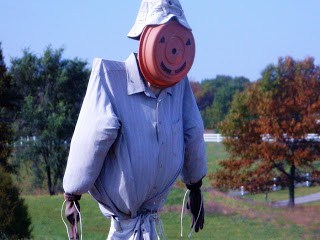 And now on to the cake. 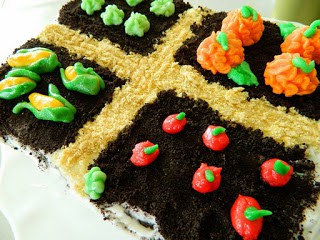 This cake isn’t raw. It’s not even close to being raw. It’s the antithesis of raw. It’s raw’s evil, sugar coated twin. But it’s vegan, super cute, and great fun for a birthday party!
Vegan Chocolate Cake
2 cups all purpose flour
1 1/4 cup vegan sugar
1/2 cup cocoa powder
1 teaspoon salt
1 teaspoon baking soda
1 teaspoon baking powder
3 tablespoons ground flax seeds
1/3 cup vegetable oil
1/2 cup apple sauce
1 teaspoon vanilla extract
1 teaspoon vinegar
3/4 cup water
Preheat oven to 350 degrees F and grease and flour your choice of cake pans. I used a 13″ x 9″ pan, baked the cake, cut it half, and made it into a layer cake. Two round cake pans would work, as well.
In a large mixing bowl, sift together the flour, sugar, cocoa powder, salt, baking soda, baking powder, and ground flax seeds. Stir in the oil, apple sauce, vanilla extract, vinegar, and water. Mix to combine, then beat for about two minutes.
Pour into pans and bake for about 40 minutes, until a toothpick inserted into the center comes out clean. Let cool completely.
Vegan White Frosting
2 1/2 cups powdered vegan sugar (make your own powdered sugar by whirring granulated sugar in the blender for a few minutes)
1 cup smart balance (or other vegan spread)
3 tablespoons soy milk
1 teaspoon vanilla extract
1/4 teaspoon salt
Cream the frosting ingredients together until very smooth and spreadable.
Vegan Icing for Piping
3 cups vegan powdered sugar (this can also be homemade, but should be sifted through a fine mesh strainer)
1/4 cup smart balance, or other vegan spread
1/4 cup solid vegetable shortening
1 tablespoon soy milk
food coloring
cake decorating bags and tips
separate the icing into four equal batches and tint red, orange, yellow and green
crush the cookie part of Oreos and Vanilla Wafers for the dirt and paths
Once the cake is bake and cooled, and the frosting and icing made and at the ready, begin to assemble the cake. First, apply a crumb coat, which is a very thin layer of frosting and allow to dry for several minutes and set up just a bit. This layer will seal the surface of the cake and prevent crumb speckles getting dragged through the icing. Then frost as usual. This is the blank canvas on which to create a garden.
Sprinkle the crushed Oreos in the four quadrants of the cake to make the sections of dirt. In the same way, sprinkle the crushed vanilla wafers to form two intersecting paths across the middle of the cake.
Making the vegetables is the fun part. These look much more tricky than they actually are, and are basically just blobs … but it’s a good idea to make a few practice veggies on wax paper.
A good one to start with is the pumpkins. I made these using the larger star tip. Squeeze out enough to make a rounded, pumpkin shaped blob and give a little twist to pull the tip away. Make all the pumpkins then move onto the tomatoes.
The tomatoes are made with a large round line tip. Again, just squeeze out enough to make a round blob and give a twist to pull the tip away.
Next, use the yellow and a leaf tip to make slightly cone/corn cob shaped blobs.
Using the green icing and a leaf tip, finish the corn by making a leaf on each side of the yellow cobs. I put six cobs in my garden. Make the lettuce with a small star tip. You can make yours more detailed than mine by adding some surrounding leaves with a leaf tip.
Finally, using a line tip, add some green handles and a vine or two to the pumpkins, and green stems to the tomatoes. A leaf tip can be used to add a few leaves as well.
Some folks will say the sugar in Oreos isn’t vegan. Here’s my thoughts on that … Which Sugar is Vegan?
That said, my ambition is to create a raw garden cake in time for the next birthday party in December! 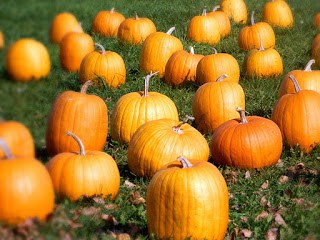 Found your site while searching for some raw food ideas. I will definitely give this cake a try!

That cake is the cutest. Such a fun idea. My kids would love it.

it may be raw's evil twin but it's SO PRETTY

The cake is adorable!! And great for kids!